Some time on the exact same day when Amazon Japan informed its customers Kindle coming to Japan market, Rakuten, the nation’s largest e-mall platform, is turned out to launch an information site of its e-book reader Kobo, which Rakuten bought November 2011. 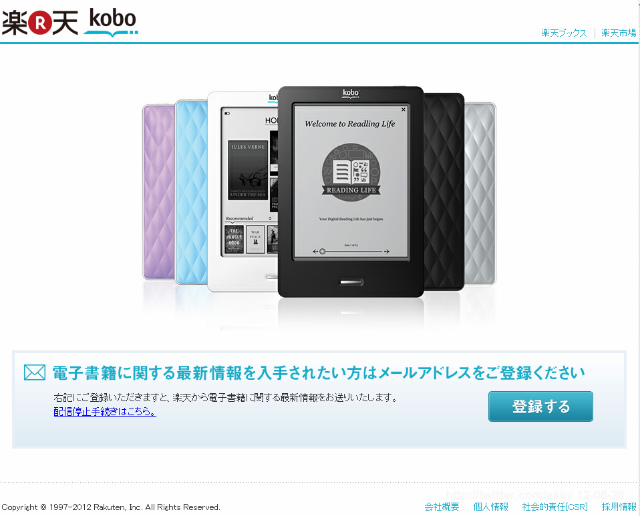 The site has a single page with Kobo Touch eReader image, which has been sold in US since last year 2011. Same as Amazon Japan, the page has a button to subscribe mail newsletter.
Although CNET Japan reports [J] tonight that the site was launched June 21, no one referred the site until today on Twitter or other sites. Google Search does not show the URL indexed under the date earlier than yesterday. It seems for me that Rakuten reacted against Amazon Japan’s move. The Kobo’s product photo on the page having the original English contents displayed show that they did not have time to decorate it with more appealing Japanese mock-up.
CNET Japan also tells that Rakuten is planning to have a press conference on July 2, with Rakuten Chairman&President Hiroshi Mikitani, titled “Press conference for e-book business by Kobo”.
via @hiroumi’s tweet [J]