Last week, Japanese Twittersphere had much debate on the topic how Twitter and social media are weak against disinformation, as a false news site Kyoko-shimbun was criticized by publishing a fake news with a real politician’s name and photo.
The big astronomical event on May 21 morning gave us lots of moving photos, but it was inevitable to get forged images on social media. These are some from Japan/Japanese which really buzzed.

@ryuki_guilty15 tweeted “his friend” took this, retweeted over 30K times.
http://twitpic.com/9nfwq6
which turned out to be the one on National Geographic taken in 2010 Thai.
The same photo buzzed on Reddit, too.

When @wacamera explained how he composed 3 photos, solar eclipse and his right and left hands on iPhone app Blendar one hour later, the photo already circulated on Twitter.

Someone posted it to TV station as his/her photo then.

Finally, it goes over the language barrier and Twitter official blog introduced it. 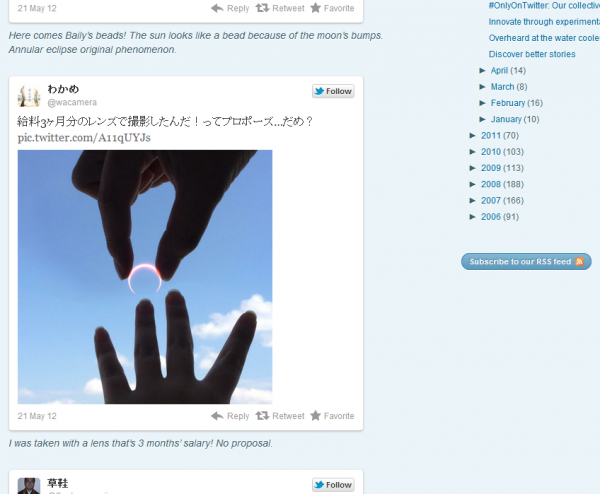