Allatanys, an website where you may read headline news from three of Japan’s most published newspapers in parallel, run by Yomiuri Shimbun, Asahi Shimbun and Nikkei, has ceased yeasterday, February 29, 2012.
The site top shows a short text with background image which makes the text hard to read. The text tells, “Allatanys site has ended. Allatays, a site for compared-reading Nikkei/Asahi/Yomiuri, stopped its distribution at the end of February 2012. Thank you for your long-term reading. You may read the news on each company’s website.”. And three newspapers’ website are linked. 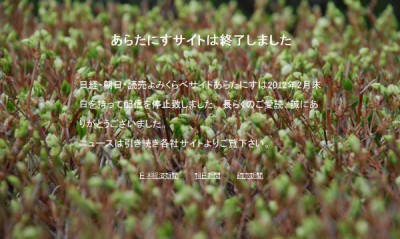 Yomiuri, Asahi and Nikkei are on top of the world’s most circulated newspaper ranking, Yomiuri #1, Asahi #2 and Nikkei #7.
Allatanys began on January 31, 2008. We covered its free iOS app release on February 2009.
On Facebook, these three had opened Allatanys page, where students are running discussion place under the three newspaper names. This Facebook page will remain with Allatanys brand.
There are no related news around this termination found on Google News so far.