As expected, the opening of year 2012 on Japanese Twitter was a full stream of new year’s greetings. After entering into 2012, Twitter, both site and API, went down by heavy load. 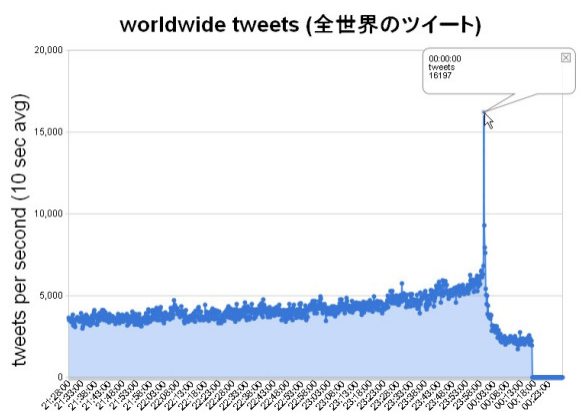 According @dfnt, on unofficial Twitter traffic counting service Tweet Counter showed that the peak tweets at the midnight January 1, 2012 in Japan Standard Time was 16,197 tweets per second.
The same Tweet Counter counted 14,594 tweets when Japanese made the latest official record on an anime movie “Tenkuu no Shiro Laputa”(“Castle in the Sky” in US), which was authorized as the record by Twitter official 5 days later. The official number was 25,088 tweets per second.
So, although it is unofficial statistics, as the same measurement says the New Year’s Eve tweets were 10% more than the Laputa tweets, Twitter’s 2012 began with the largest tweets ever. We will see Twitter’s official number soon, and that will be much higher than the numbers recorded in 2011.
Anyway, Happy New Year from Japan! though most of you are still in 2011 😉