Telecommunications Carriers Association with all 5 Japanese cellphone carriers NTT Docomo, KDDI au, Softbank Mobile, Wilcom and e-Access(who runs e-Mobile) issued release on December 21 [J], ask their users not to call or e-mail around and after the midnight of 2012’s new year’s eve. 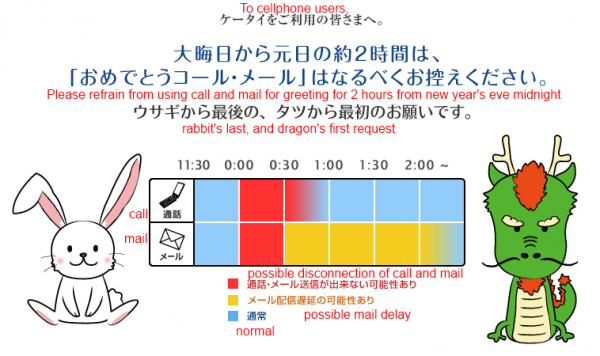 “Rabbit’s last, and dragon’s first request” line is from Chinese Zodiac, as 2011 was a year of rabbit and 2012 is dragon.
How active Japaneses’ greeting after the New Year’s eve may be already known by the incident they recorded the Twitter’s world record last year.
Docomo’s SP mail glitch in December was reportedly caused by too much traffic on regular media, though some online tech media point out that it is the fault of the system design (Docomo uses IP address to identify mail users). For carriers, asking their customers not using cellphone might be the cheapest preparation.
via Hatena Bookmark News [J]