A manga (Japanese comic) series “Hana no Andoroido Gakuen”(Sweet Android High-school) is a comic depicts the battles of Android handset vendors as a school life with caricatured girls who have each vendors characteristics. 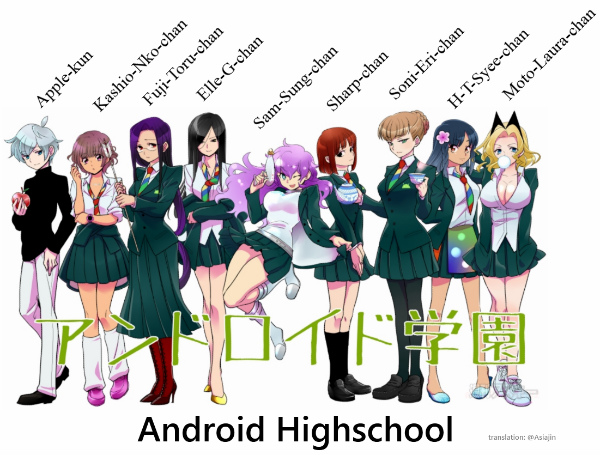 “-chan” is a Japanese post-nominal title used for young, tiny or small person. “-kun” is similar but for boys, so her Apple is described as a boy, who goes to another high-school at next, and has quarrel with Sam-Sung-chan.
A teacher Google give favor to 5 students, Moto-Laura-chan(Motorola), Sam-Sung-chan(Samsung), H-T-Syee-chan(HTC), Elle-G-chan(LG) and Soni-Eri-chan(Sony Ericsson). Mr. Google even married with Moto-Laura-chan but as the teacher has a policy not to give precedence to her, everyone tends to forget that the two are in marriage. 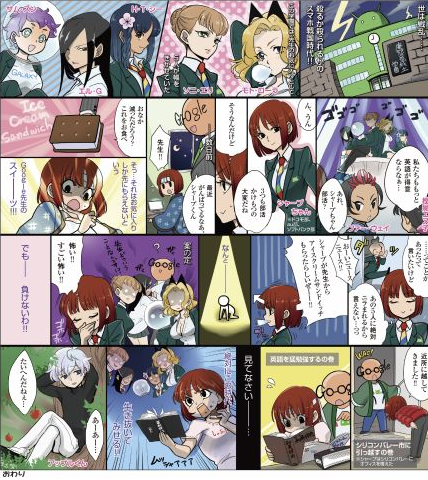 In contrast to international students(it’s a school in Japan), Japanese students like Sharp-chan, Fuji-Toru-chan(Fujitsu-Toshiba) and Kashio-Nko-chan(Casio-NEC) seem to have anxieties and complains.
The manga runs on extra editions of Weekly Ascii, a PC magazine with long history in Japan. (I remember I subscribed Monthly Ascii when I was a high-school student.)
You may browse some excerpts [J] on Shu-Asu-Plus(Weeky Ascii Plus), online version of Weekly Ascii. The site also released a character model sheet [J]. Each character has most attractive feature and belonging bukatsu(after-school activity circle).
[Update 2012-01-06] By seeing foreign media reported about the comic, Weekly Ascii added text for people who want to read (by machine translation) and/or make translated versions.