Kristopher Tate is an American-born serial entrepreneur who had appeared many times on TechCrunch by his photo-sharing start up Zooomr founded at his age of 17.

TechCrunch’s database had not tracked him later but he migrated to Tokyo with Zooomr with seeing more possibility in Japan and Japanese web in 2007, has been actively developing several services,

His latest product is ConnectFree [J], which offers free WiFi access points around the nation in exchange of displaying toolbar with ads. As Japan is known with comparatively poor WiFi environment because of widespread use of 3G data connection service, it sounds a good idea to add more free WiFi spots all around the nation with good incentive to shops and advertisers.
Tate leads the company ConnectFree as a CEO and Chief Development Officer and on October 26, the company made a big partnership [J] with Japan’s (and the world’s) largest printing company Dai Nippon Printing(DNP) to promote a WiFi system which enables to shops to offer free WiFi spot by inserting ConnectFree toolbar on user browsing pages.
However, calamity for them (or bless for consumers) began at night December 5, when a notable security researcher Hiromitsu Takagi appeared on a shop which serves ConnectFree WiFi and a good-looking case-study on the service site. With praising the dish, Takagi demonstrated and tweeted to his security-aware 11K followers how ConnectFree modified the original HTML codes of whatever websites you are browsing, with explaining that it collects and sends users MAC address, Twitter account name, Facebook account name to the ConnectFree server. It also replaced Amazon associate program links all with ConnectFree’s ID (which is not allowed by Amazon’s terms of use) and tracked accesses by ConnectFree’s Google Analytics account.
On a popular tweets curating service Togetter, Takagi’s and related tweets are summarized [J]. Takagi started tweets at 9:21 p.m. and he said he got a phone call at 12:50 a.m. from “ConnectFree president”, who must be Tate and according to tweets they talked over the phone about nearly an hour. At that point, Takagi’s tweets got great attentions on Japanese Twittersphere.
A half day later, 6th afternoon, the company issued an apology release [J] with its stopped all of MAC/Twitter/Facebook/Amazon/Google-Analytics manipulation. The release said that it collected those data but never used or handed them over to the third-parties. About Amazon affiliate modification, it told that it was experiment only at one shop (where Takagi ate at the night?), but after the release, some others reported on Twitter that they salvaged JavaScript file from their browser cache when they used ConnectFree about a month ago the Amazon-related code were there at other shops.

(Tate’s apology on his personal Twitter account)
After Asahi [J], Yomiuri [J], many more followers and Yahoo! Japan News [J] reported it, the word “ConnectFree” (in Japanese katakana notation) was ranked on the top 10 of trending words both on Twitter and Google today December 7.
According to Twitter users, ConnectFree’s company profile page [J] was observed to delete(“All except CEO disappeared”) and resume(“Some boards are back now”) some executives today.
DNP also announced immediate shut-down of ConnectFree WiFi services at its affiliating shops. Although I do not know how deep those other people were explained and understood what Tate was trying to do both in technically and ethically, the attitude of adults around the young foreign challenger is not so admirable.
[Update 2011-12-13]
Japan’s public broadcaster NHK reported it on its national news [J, movie on the linked page]. 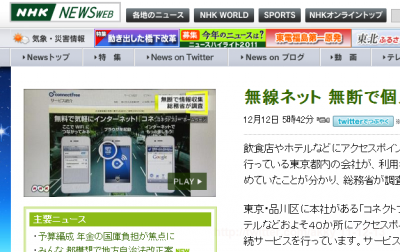 According to NHK, ConnectFree system was served at about 40 restaurants and hotels in greater Tokyo and Kwansai area. Japan Ministry of Internal Affairs and Communications(MIC) heard from ConnectFree as it could violate a law of Telecommunications Business Act(Denki Tsuushin Jigyou-hou, 電気通信事業法) which orders to keep privacy of communications.