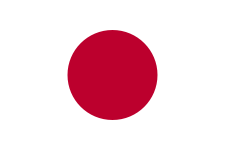 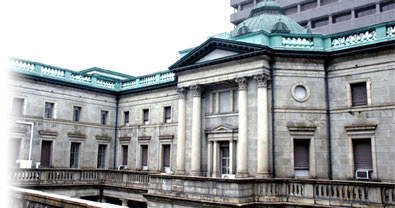 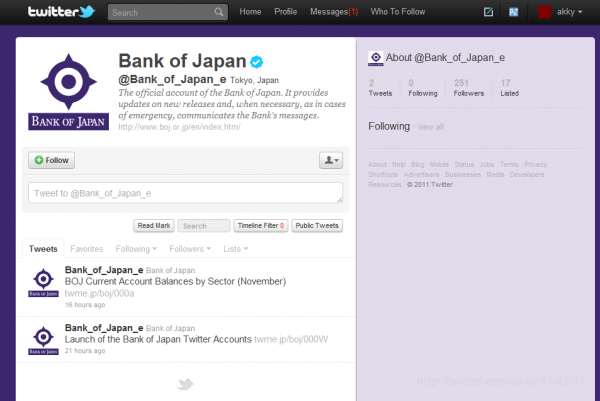 These accounts provide updates on new releases on the Bank’s web site. In addition, the Bank may, when necessary, as in cases of emergency, communicate its messages through these accounts.

Japanese account has tweeted 4 messages, but English one has 2 tweets so far. It seems English account only tweets only when there is an English web page matched with the message.
Japanese Yen has been being in historic high, despite national debt and two decades economical stagnation. Bank of Japan is always pressured by pro-export industries and politicians.
Especially after the Eastern Japan disaster last March 11, many government and government-related organization began Twitter after criticism for not being open, some of them are in English, including Prime Minister’s Office (English one), Tokyo Electric Power Co.(TEPCO) and Japan Ground Self-Defense Force (=army, though they are not allowed to identity themselves so).
All links on the tweets are abbreviated by twme.jp, which is provided by CGM Marketing, a subsidiary of Digital Garage who assists Twitter’ localization. It shows Bank of Japan uses Tweetmanager by CGM Marketing, who also manages Twitter guiding portal TwiNavi.