LinkedIn has released Japanese language support as its 10th language on October 18, 2011. Here is the top page for visitors when you set Japanese as your prior language. 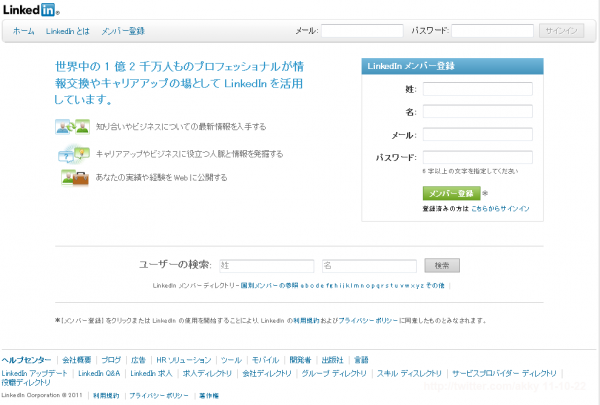 LinkedIn Japanese localization plan was announced in September 2007 at first by its local partner Digital Garage. In this May, Digital Garage announced again the Japanese localization project, and this time the thing is getting done.
Probably learning by Twitter and Facebook having Japanese-only guide sites, LinkedIn Japan also launched “LinkedIn Katsuyouhou Manyuaru”(Effective Guide For LinkedIn), which has many pages with step-by-step usage manual on different features on the LinkedIn. It also starts an official Twitter account @linkedinjapan. Yes, it is must for Japan.
The localized page looks like this, 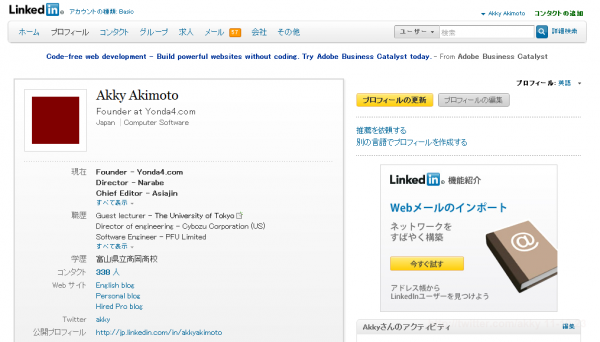 Most of menu items are translated in natural Japanese. When there are two ways of describing the original English menu text, it seems many texts are chosen with Katakana words, which show the original English in Japanese close pronunciations (e.g. akutibiti=activity, kyaria-samarii=carrier-summary), instead of Japanese counterparts(e.g. 行動=koudou=activity, 職歴=carrier-summary). With my internationalization expert background, I would say that their localization is done rather lightly. And if that was done intentionally (to make gap smaller against English menu), they might expect more Japanese people networks with English speakers after they get used to LinkedIn itself with Japanese menu.