This is a follow-up post for my monthly column on The Japan Times, Why do Japanese advertisers suggest Internet-search keywords?. There I explained why many of paper/TV ads in Japan are asking people to search by keywords, instead of typing URLs.
Soon after the column was published, I got a question from a reader if I can name a real example the advertiser failed on the search-keyword method, i.e. asking potential customers to type a certain keyword but that resulted not showing their website but competitors’ at the first position.
There is a blog run by Aun Consulting, a Japanese SEO consulting firm. On the blog around year 2007, they had a series of posts [J] to check how search on the advertised keyword really ranked on Yahoo! Japan and Google, both on organic search and paid ads.
There are some failed attempts recorded. For example, Nisshin Food asked to search by “Rifiru” (“re-fill in Japanese Katakana”) to promote their newly released instant noodle with which you can reuse a plastic bowl with another chunk of noodle, a kind of “Chikyu ni yasashii”(“kind for the earth” which ecology-friendly people love to use) product.
Unfortunately, there are many other websites shown both on Y!J and G, most of which are about replacement papers for day planner. Nissin’s special site was reportedly ranked at 26th on Yahoo! Japan, 17th on Google. Both were out of the first results page. They did not buy Overture/AdWords ads so even if there were consumers searched on the suggested keyword, it must be difficult to find the related website.
Another failure was done by Coca Cola Japan. In 2007, they gave a Japanese smiley “(^^)” in a box on their paper ads. However, as you know current search engines do not support search by those symbols, their site was not showed at the first page [J].
When people applies protocol without thinking, funny things happen. This train ad suggests to search http://r25.jp/ by “r25.jp” (via Daily Portal Z [J]) 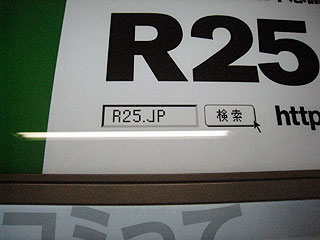 Or, it may still work for some people who prefer search than typing URL.