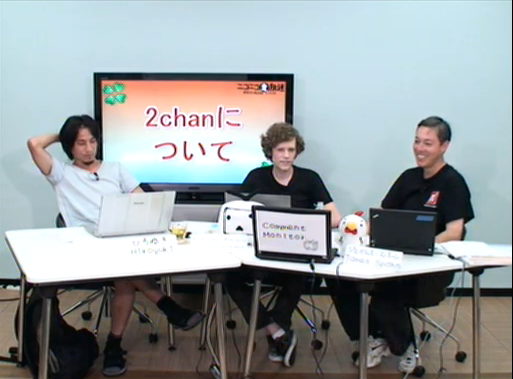 Moot x Hiroyuk​i Social Media​ Talk Session
Join in on the entertaining talk show featuring 4 chan founder Moot and 2ch founder Hiroyuki!
This will be Moot and Hiroyuki’s first official meetup. Within this show, we will find out what exactly does “social media” mean to them and more! Niconico oversea director James will also be joining with us so don’t miss out!!
Nico Nico Douga English version announcement

2-channel is Japanese massive anonymous online forum, and 4chan is a kind of ground-son service in English.

Moot: On the day it was founded, 4chan was posted to the anime sub-forum of [huge forum] Something Awful and so many of the first users from from there, but the site itself is 100% based on a Japanese site called Futaba Channel, or 2chan.net.
Futaba Channel is in turn based on 2channel, which is a huge text BBS that’s inspired a lot of the anonymous and otaku culture in Japan.
I had the opportunity to meet 2channel’s founder, Hiroyuki Nishimura at SXSW Interactive this year, and it was a real treat.
Business Insider

Partially helped by James, Nico Nico Douga’s oversea director, Hiroyuki talked with moot about 4chan, his new project Canvas, his purpose of this visit, etc. Earlier today they took moot to a new video-streaming disco Nicofarre. Hiroyuki explaining Amezo, from which he cloned 2-channel, and how he named it 2-channel (implying Amezo was the first one) was interesting.
Nico Nico users asked questions via Nico Nico overlay comments. Question like “What do you think about Anonymous?”, “What is the key feature to make consumer generated site stand out?”, “2-channel is infamous in Japan, how is 4chan in US?”, “To both, what is the social media going like 10-20 years from now?”, “How about having longer talk with you two and publish a book? (There are several Japanese books featuring Hiroyuki and other popular persons like ex-Livedoor Takafumi Horie)”
At the end of 80-minutes session, there were over 23,000 watchers with 42,000 comments. They closed the session with telling that they would be going somewhere in Roppongi.