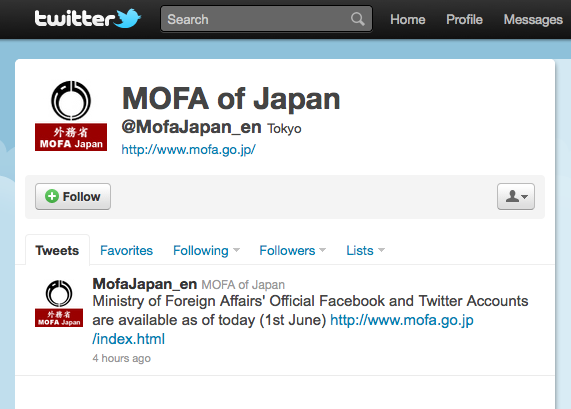 Back in March, right after the earthquake and tsunami hit Japan, the Prime Minister’s Office opened a Twitter account first before launching a Facebook page just a few days later. And yesterday, the country’s Ministry Of Foreign Affairs (MOFA) decided it’s time to do the same.
According to Foreign Minister Takeaki Matsumoto, the move to integrate social media in its communication channels to the public isn’t directly related to the earthquake. However, the web proved to be an effective means of communication in disaster situations after 3/11, which was widely acknowledged by Japanese politics and mass media alike.
Matsumoto said his office will post information on both platforms in English and Japanese. Twitter and Facebook buttons have also been added to the Japanese MOFA website already.
The official MOFA Twitter account in English is here (Japanese).
The official MOFA Facebook page in English can be found here (Japanese).