This morning, Nikkei reported [J] that Facebook is going to begin local coupon service in Japan.
Nikkei was correct. The new service is “Facebook Check-in Coupon”, the Asia’s first localization of its Facebook Deals. 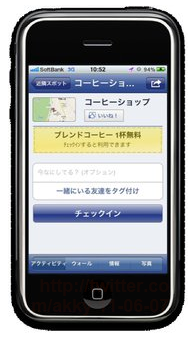 Just after the 30 minutes event, Their official introduction on Facebook [J] has been posted on at 15:30.
The event features Shelly, an American-Japanese model, and Yuji, an another American-Japanese model.
Shelly and Yuji were reported to explain [J] to audience that Facebook is a service which you can easily share photos and movies, you can tell friends that you joined an event. Funny thing is that the audience had been requested not to take any photos or movies during the event!
[FYI] Shibuya 109 on Google Street View,

View Larger Map
This small space is often used by many companies/brands, because so many people walk around the crossing.