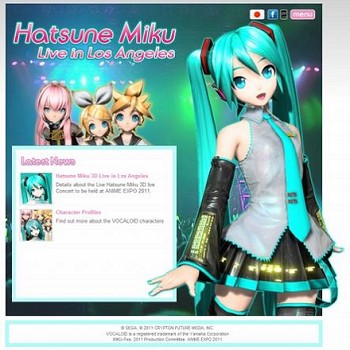 Japanese virtual singing instrument application Vocaloid character Hatsune Miku will hold a concert at “ANIME EXPO 2011” in Los Angeles on July 2. This is the first time that she holds concert oversea.
Recently, Toyota USA featured Hatsune Miku for its Corolla promotion.
http://youtu.be/E15PE7iGT0U
Therefore ANIME EXPO and TOYOYA jointly hold the concert of Hatsune Miku.  Sega produces 3DCG and Crypton Future Media takes charge of the entire supervision.
She already held three concerts in Japan (The first live was in 2009).  Huge transparent screen of 2m×6m was fixed in the stage and her 3DCG was reflected over it. All other members of her band are real human.
Movies from her 2009 stage,


The concert in Los Angeles will be held with the improved version of this concert.
Hatsune Miku topped Japanese music chart the first time as non-human in 2010.