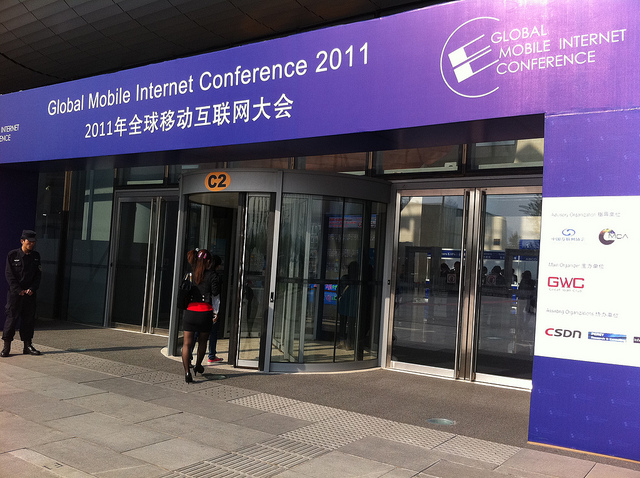 The Global Mobile Internet Conference (GMIC), one of the world’s largest annual conference featuring mobile and social app trends, took place at China’s national convention center, which is located the Olympic Stadium in Beijing, Chinese capital.  The two-day event celebrated its fourth edition this time, and it has been solely organized by Great Wall Club, a team of CEOs and executives of telcos, social network service providers and mobile app developers in Japan and Mainland China.   I had another assignment in Tokyo, and I could make it only on Day 2. 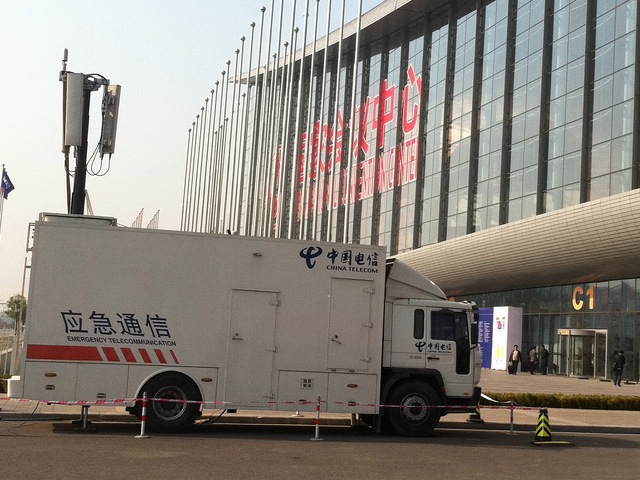 Just in front of the venue, China Telecom’s base station van was standing by for burst mobile traffic which might be generated by an enormous number of the event attendees. 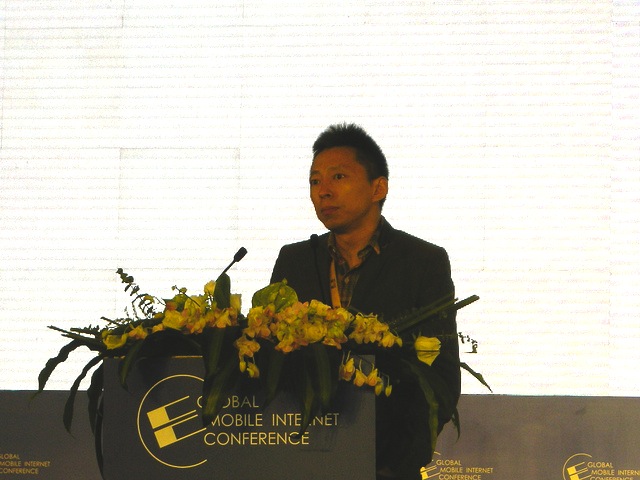 The Day 2 started with a keynote speech by Charles Zhang(张朝阳), CEO of Sohu.com(搜狐), where he reviewed what he had done during the last ten years and poured out his regrets including the acquisition of Chinaren[C] or the largest online alumni club in China with over 80 million registered users. (video by Tech163 [C]) 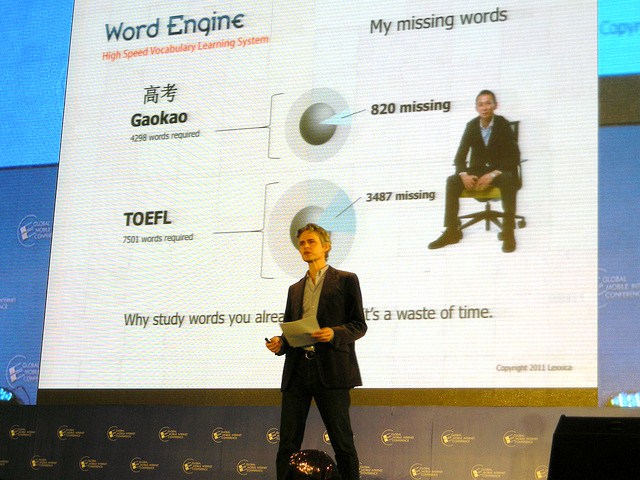 G-Startups Competition
Between panels and speeches by Internet business tycoon and celebrities from China, Japan and the rest of the world, there were on-stage live demos by the G-startup competition winners who had been chosen from 20 start-up finalists.  The both winners will won the prizes including participating incubation programs by Innovation Works (Beijing-based incubator founded by Kai-Fu Lee, the ex-president of Google China), China Accelerator (Dalian-based incubator founded by angel investor Cyril Ebersweiler), and Plug and Play Tech Center in Silicon Valley.
The 1st place winner of the seed/early-stage category:

SmarTots (Beijing, China)
SmarTots is a mobile education platform for children aged 2-7. It brings together educators, parents, and developers to create an interactive, fun, and manageable learning experience for kids through mobile apps. The company strives to unlock the true educational value of mobile devices by providing parents with reports, parental tools and personalized recommendations across many hardware and software ecosystems.

The 1st place winner of the growth-stage category:

Word Engine (Tokyo, Japan)
Word Engine is the fastest way to permanently memorize up to 99% of all the vocabulary required for important subjects. Word Engine is fast, inexpensive and mobile. They offer vocabulary courses for test preparation and special business needs.  The app is a proven scientific solution already in use at hundreds of universities and multinational corporations around the world. They very much look forward to entering the China market. 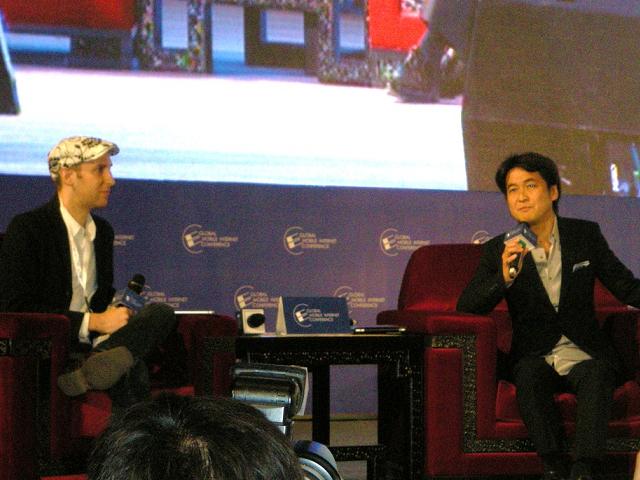 After those demos, Takeshi Natsuno(@tnatsu[J]),  the inventor of Japan’s mobile web standard for feature phone i-Mode and the president of GWC (Great Wall Club) Japan, was interviewed on the stage by Plus8Star‘s Benjamin Joffe(@benjaminjoffe) who is very familiar with the Asian tech scenes.  Mr. Natsuno explained what has been happening on the Japanese mobile industry during the last few years, saying Japanese manufacturers once quit the development of feature phone handsets requiring a bunch of costs, but got back to develop additional features for the global cost-free mobile platforms such as Android.
He emphasized it is very important to have this kind of event in China, furthermore, organized by Chinese and Japanese industry players.   (YouTube Video by Asiajin) 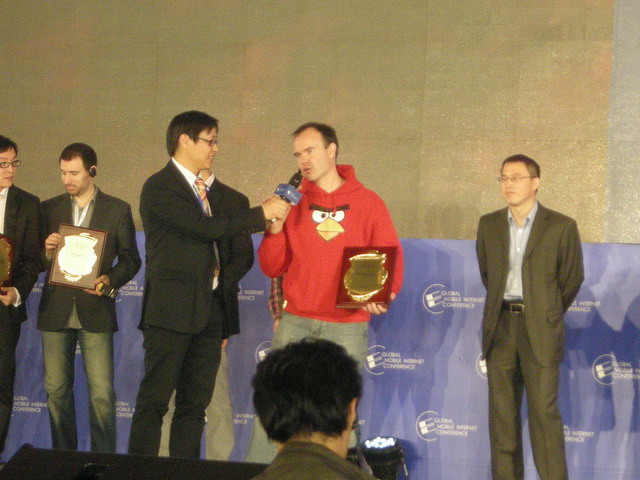 Peter Vesterbacka, Marketing Manager of Rovio Mobile (Maker of Angry Birds) interviewed on stage.
In association with the event organizers, Chinese mobile game portal d.cn[C] presented the Global Mobile Game Awards. The following ten games won the awards. (YouTube Video by Asiajin)   Angry Birds captured an audience’s extra attention because they reportedly had earned USD2M in their 1Q.  Beijing’s Global Times reported they would partner with a certain local game platform operator to launch their business in Mainland China.
The awards went to:

Isao Moriyasu, the COO of Japan’s leading social app platform operator DeNA, unveiled they would partner with Fujian-headquartered Net Dragon (listed on the HK Stock Exchange), running mobile app store 91.com in China, and start co-developing social apps in the both countries. Furthermore, he announced the company would launch a CNY10M (USD15.4M)-worth foundation to encourage Chinese app developers to bring out more social apps to their platform.

After the Event
After the event, Asiajin contributor Hiroumi Mitani and I had a chance to join a dinner party with Japanese businessmen who are actively working with the Chinese mobile industry in Beijing. (Thanks to Jin Uehara(@ueharajin[J]) of MyNet Japan[J])   They insisted that we put our eyes on two emerging Chinese companies – Dianping.com(大众点评网)[C] and Vancl(凡客诚品)[C].  Dianping.com is an Yelp-like local search and reviews online service.   Vancl is China’s largest e-commerce retailer that delivers fast fashion clothing to online consumers nationwide, and a noteworthy fact is that they have a distribution network of their own for a better user experience such as the rapid delivery of merchandise.   A number of great internet entrepreneurs were seated around the party table, but I won’t tell you who they were because it was a private opportunity for all of them.

In The End
Smartphone handsets are not inexpensive for average Chinese people, I couldn’t see a lot of people carrying the iPhone or the Android phone on streets in Beijing where workers get comparatively higher income.   (Regardless to say, everyone at the event had s smartphone of some kind.  That circumstance did not reflect the average of what’s going on in the country.)   That’s why Chinese and foreign handset manufacturers are competing one another to introduce inexpensive range line-ups of smartphones which can be easily accepted by Chinese consumers.  (But I know “average” makes no sense in the country.)   It’s volume zone business that intends to earn the market shares of the average-income workers.
For social app and mobile app developers, to achieve a great success in the country having the world’s largest mobile population, their products should fit not only the user interface of typical smartphone handsets but also that of China-made simple but intelligent handsets that are ranged between smartphone and featurephone. 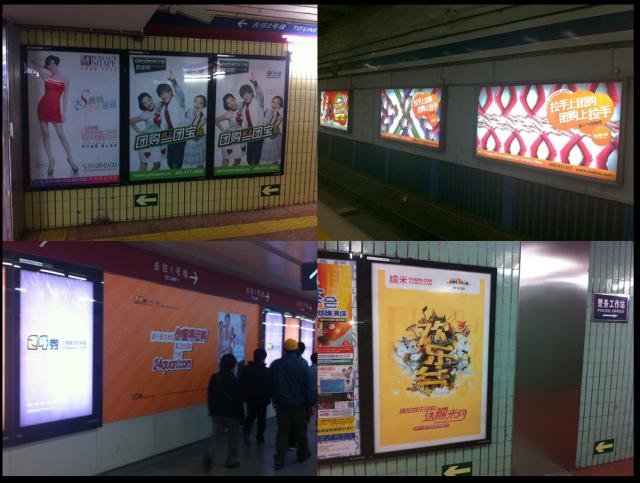 Daily deal site ads at Beijing Subway: Groupon.cn[C] (upper-left), Lashou.com[C] (upper-right), 24quan.com (lower-left) and Nuomi.com(lower-right)
During my stay in Beijing, I often used the subway to go somewhere, and I found a great number of the daily deal site ads at stations and on trains.   Reportedly there are more than 4,000 Groupon-like daily deal sites in the country.   In addition, it is surprising that a company running “Groupon.cn” site has nothing to do with US-based Groupon.     4,000 deal sites and 800 million mobile users – these numbers have the power to change the global standard, which sometimes badly affects our business and scares us, but they mean the country has a great potential.

Author’s note: The event’s official media sponsor Tech163 has a great special coverage[C] which are filled with transcripts of keynote speakers and a bunch of interviews with celebrities in the industry.
See Also: