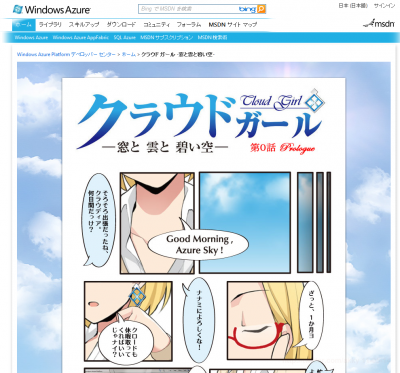 The first episode of this “Cloud Girl” with subtitle “Mado to Kumo to Aoi-sora”(windows, clouds and azure sky) is said to be released late this May 2011, on a prologue.

The heroine, Claudia Madobe (@Claudia_Azure “madobe” means window-side in Japanese) was born on November 20, 1985, the date when Windows 1.0 was released, having a Japanese father and French-American mother. 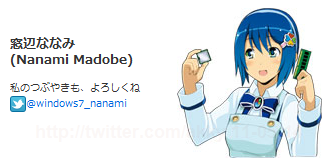 Claudia, who is visiting Japan and her cousin Nanami Madobe(@windows7_nanami), will solve several problems at a computer parts shop in Akihabara, where Nanami works for.
A sub-character Nanami Madobe has been serving as a Windows 7 promotion character since 2009, but she was not an “official” Microsoft character before.
Microsoft Taiwan’s Silverlight promotion with a girl character Hikaru Aizawa made Japanese jaw dropped last autumn, as it was so Japanese-ish than Japanese.
This time Microsoft Japan (recently renamed from Microsoft K.K.) presses the manga-girl promotion for Japanese enterprise decision makers in orthodox Japanese way.