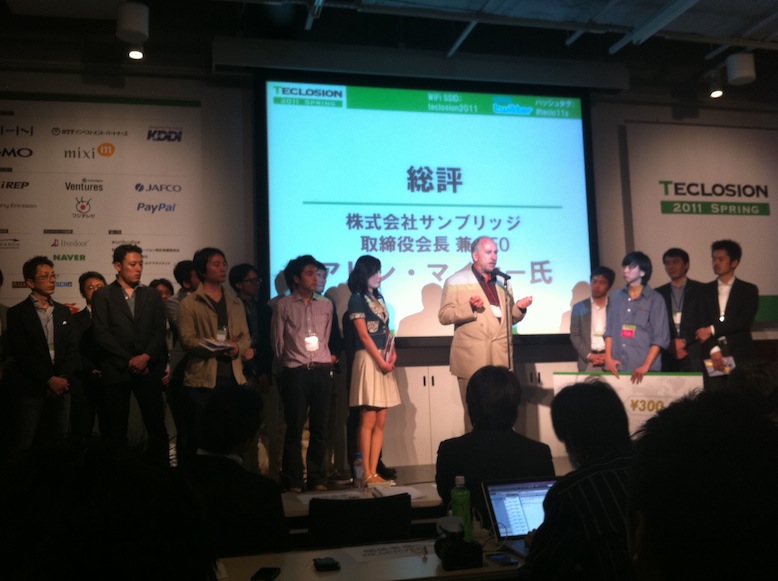 In the morning session, CEOs from Mixi, GMO Internet Group, NHN Japan and Evernote made their keynote speeches.   After a lunch, Four venture capitalists, including Taiga Matsuyama (East Ventures, Kronos Fund – known as a seed investor for Zynga Japan) and Masashi Kobayashi (IVP or Infinity Venture Partners known as a seed investor for Groupon Japan) , had a panel discussion to look around Japanese start-up trends and its future.
In the final session, there was a presentation competition titled Startup Battle, where 15 start-ups presented their brand new web services to win the Grand Prix prize.   Let’s see each of them.

Appict.me by Nobot
Nobot is a smartphone ad optimizer and also work with several major foreign ad networks.   Appict.me is a program for developers to promote their smartphone apps by using social media.   It allows users of a smartphone app participating the program to recommend the app to their friends via social media. (see these Asiajin articles for more about Nobot.)

i.ntere.st by tattva
Tokyo-based Tattva just introduced an object-based check-in service called in.ter.est.   I wrote about it here on the Startup Dating website.
zaim by Takako Kansai (The Excellent Award Winner)
Takako is a well-known female system developer working with a Tokyo-based tech start-up UserLocal[J].   Apart from her job at the company, she individually developed this social app that helps you keep household accounting on the iPhone.   She introduces it can be also considered as a money stuff version of popular document sharing app Evernote.

Musavy by Musavy, Inc.
The company is named after Mutual Savvy.   This web app helps you to learn more about a topic by having a debate on the topic online.   It has a feature to recommend users to take another topics that they may be interested in.   They intend to launch the service in North America prior to Japan.

forkN by Seesaa[J]
Seesaa is a blog platform company, and they developed a e-publication platform called forkN that allows users to convert documents to ePub/PDF formats and publish them online for PC, smartphone and tablet users.    You can share several experiences with other users on the service, such as writing, reading, commenting and purchasing the publications.

(The Excellent Award Winner)
MoSo by MoSo
MoSo is a desktop app for Macintosh that helps you create your videos instantly.   It allows you to publish the videos on FaceBook, Twitter and YouTube without any additional procedure.   The app ranked in the first place in the free app section at most AppStores within just three days after the release.

(The Excellent Award Winner)
Midonet by Midokura
Earlier this week, the company fundraised JPY100M (USD125M) in its seed round from some VC firms including NTT Investment Partners[J], 1st Holding[J] and datacenter company Bit Isle[J].  They are a cloud enabling tech company, and currently planning to introduce the alpha version app very soon.

shopping+ by Insight Plus
Shopping+ is a smartphone app-based object check-in service that helps you learn realtime quotes and check inventories for what you are about to purchase by sharing them with the other users.   Users can communicate with the others who have the same interest in buying something.   Insight Plus was founded by Takeo Yagi, he previously co-founded TrafficGate[J], a Rakuten-backed affiliate provider and now LinkShare Japan.

4-Treasure by Alpha Do
4 Treasure is a location-based service that allows you to check in restaurants, diners, cofee shops etc.   Unlike other location-based services such as Foursquare, users can gain experience points corresponding to how much you have paid at a specific location.  For shop owners, it allows them to collect information on what kind of customers visit, and to issue discount coupons to potential customers that they wish to invite.

tabeni.co by MyNet Japan
Tabeni.co is a social app for smartphone and helps you find companions who can hang out and dine with you.   MyNet Japan is known for having developed a variety of restaurant supporting services, and the app is expected to integrate with them.

kizna by Kizna
Kizna is a social CRM (customer relationship management) app that Hitoshi Nakamura has developed.   He is currently running several restaurants in Tokyo, and he has developed it to interact with his customers more often more easily via social media.   The app includes a key feature that shows you a list of interactions with your customers via Twitter and Facebook.

(The Excellent Award Winner)
Livlis by kamado
Our buddy Serkan wrote this story about Livlis.

fmob
fmob is a fashion-focused social app that allows you to shoot pieces of clothing when you find them while walking on shopping streets, and share them with your friends online.   They intend to extend their global reach through the mobile app.

(The Grand Prix Winner)
Wondershake
Wondershake is a social app that allows you to learn what the people around you are interested in, and helps you start talking with them very easily.   They plan to launch the service in the US.   Wondershake was founded by Satoshi Suzuki who previously worked with Tonchidot, the inventor of Sekai Camera.

Finally, on behalf of all judges who have chosen the award winners at the event, Mr. Allen Miner from Sun Bridge Partners commented on what 15 finalists had delivered.  He pointed out all they have potentials to achieve their success not only in Japan but also in the world, encouraged them to develop more new services from a global point of view.