What’s the overall size of Japan’s market for online group-buying sites? Tokyo-based Luxa (which runs one of these sites/more info here) regularly issues reports on the domestic industry as a whole.
And according to their latest study, the quake and tsunami that hit Japan on March 11 had a rather large negative effect on the sales numbers of the Japan’s group buying sites: total sales just reached 9.7 billion yen (US$117 million) in March 2011, based on 220 sites examined.
This chart from Luxa shows that numbers were actually going up slightly from January to February, following the sharp decline the industry saw right after Osechi gate in December: 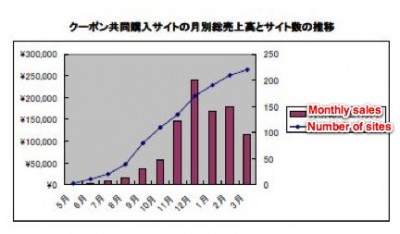