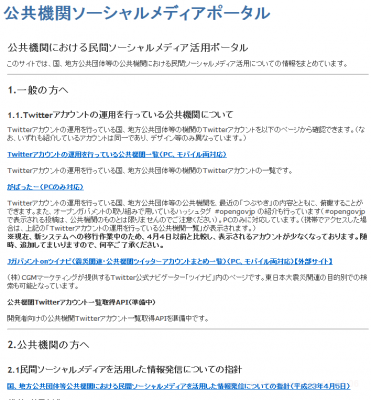 The portal shows several guidelines for 1. citizens to see social media and 2. government workers to send information via social media.
Interesting thing is, on this site “social media”/”private sector’s social media” all point Twitter only.
For people, the portal alerts that you should check if the governmental Twitter account is real, and provides some check points,

For national and local governmental sections, they hinted that the organization should have a link from their official website to the Twitter account, to convince people that the account is not fake. It also suggests that you should have a profile, giving account policy documentation and apply for Twinavi listing, which “is a possible path” to be a Twitter authenticated account, though it is also warned that listed on Twinavi does not guarantee to make it an authenticated account.
After the quake, some public/semi-public organizations have been opening Twitter accounts, including Prime Minister’s Office (English one), Tokyo Electric Power Co.(TEPCO) and Japan Ground Self-Defense Force (=army, though they are not allowed to identity themselves so).