Gijinka (anthropomorphization) is what Japanese anime/manga people love, and it often passes the language barriers.
On giant anonymous bulletin board 2-channel, some amateur cartoonists seemed to vie in their personification sense [J]. 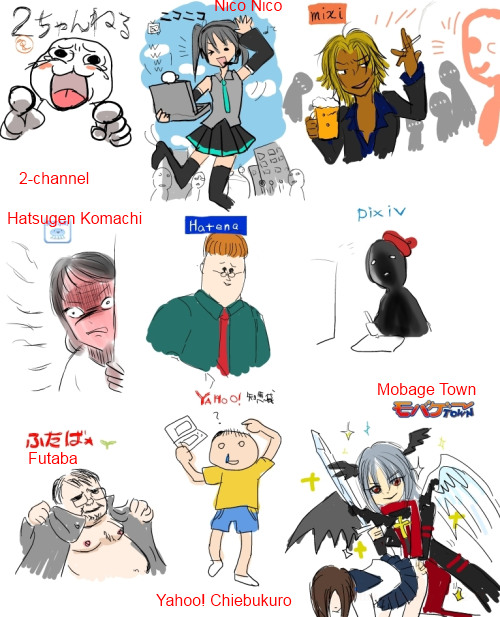 2-channel: They know who they are well. derision for everything is their basic attitude.
Nico Nico (Douga): Hatsune Miku, young girls’ livestream on Nico Nico Namahousou, people distantly watching her
Mixi: typical host men image, drinks and smokes. implies how 2-channeller look down the current mainstream Mixi users
Hatsugen Komachi: another gigantic discussion board occupied by Japanese housewives. it is said that everything is driven by jealousy there.
Hatena: Japanese geeks community. well-schooled, critics (from Japanese average), who think (only) they are logical
Pixiv: Social illustration site boasting millions of amateur (and pro) illustrator members
Different from deviantART’s one (see below), this person is given an introverted personality. Beret is a symbol of the father of Japanese manga Osamu Tezuka, often used to draw professional cartoonist and wannabe.
Futaba: The origin of 4chan
Futaba added image upload feature on 2-channel-like bulletin boards, then moot made an English version. Futaba’s domain name is 2chan.net, 2-channel is 2ch.net if you are confused.
This Futaba’s character must be copied from 4-chan’s one. See below.
Yahoo! Chiebukuro: Japanese Yahoo! Answers, though US Yahoo! Answers were made after seeing the Chiebukuro’s success
Net-savvies are irritated with never-ending dorky questions and useless answers.
Mobage-Town: possible Japan’s No.1 social network is full of games
2-channellers seem to believe that some use the social network as a dating site to find high-school girls.
English social services were personified before, you might know,

Yajiuma Watch tells that those personifications might be inspired by this. [J]