Today, 26th February in afternoon, one question around Japanese translation to English on Yahoo! Chiebukuro [J], one of Japan’s most popular Q and A service run by Yahoo! Japan, was mentioned on giant bulletin board 2-channel [J] by an anonymous Japanese web users.
The following comments (all anonymous) pointed out that the question is identical with the one from entrance exam questions of Kyoto University, one of the nation’s top university, done in the morning. And the time asked was just after the exam began. So this person must submit the question from examination room. 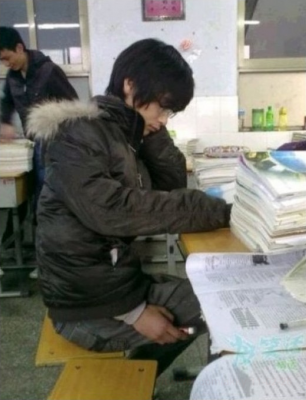 Then, 2-channel users found that the same person (id: aicezuki) made a series of English and math questions on Yahoo! Chiebukuro [J]. The math questions were done from 13:37 to 14:11 on Friday 25th, which is during the math exam time (13:30-15:30) [J, pdf].
Although some commented that it is stupid to expect answers within under 2 hours on web Q and A services, suprisingly, he/she got answers before the math exam ends at 15:30. And 4 out of 6 were correct.
Some explained how they think it can be done. Remember, memo or take photos of the questions, then ask permission to invigilators for toilet break, accessing Yahoo! Chiebukuro and write questions. Or, if you have a cooperator outside, you can e-mail to him/her, and he/she will handle Yahoo! Chiebukuro. (You need to go to bathroom twice in a single test, if you yourself want to pass the exam, though.)
The real English questions were not published yet. We will update when we get it but for the English exam, he/she could not get good answers within time.
Some of 2-channellers wrote that it is unlikely to get the exam passed by using these answers without found, and said that this may be done by a part-time exam solver, who are hired to leave exam early and make a quick model answers for big preparatory school, as those schools are expected to disclose all questions and sample answers in hours.
There is also an opinion that it is not for passing the exam itself but protesting against something or showing that the exam can be cheated.
Yahoo! Chiebukuro is one of two popular online questions-and-answers website (the other is OKWave). It was built based on Yahoo! Korea’s Q-and-A service success in 2004, then U.S. Yahoo! made a clone of it and named Yahoo! Answers.
Cheating exam by cellphone was a news in Korea in 2004, but that one was organized mass cheating. This time it goes advance with croudsourcing, which a certain Japanese web user called “Cheating 2.0”.
[Update 22:31] Public TV NHK reported the issue on its website [J]. PR person of Kyoto University answered to NHK that they would investigate issue.
[Update 22:55] Asahi followed [J]
[Update 0:54] Nikkei says that the same person did it at Doshisha University on Feb 8 [J]
[Update 2011-02-28] Some English coverages are coming,
Test taker seeks answers online during exams at several universities – The Mainichi Daily News
Web exam leak rocks elite school / Poster asked for answers in mathematics, English on Yahoo! Japan site : National : DAILY YOMIURI ONLINE (The Daily Yomiuri)
asahi.com（朝日新聞社）：Elite universities shaken by entrance exam leaks – English
Daily Times – Leading News Resource of Pakistan – Japan rattled over online exam leaks