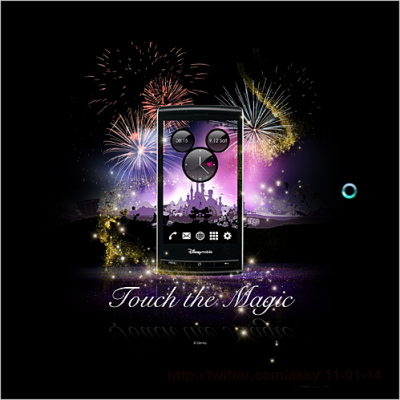 Disney Mobile is one of few successful MVNOs in Japan. Since 2008, they sell Disney feature phones [J] using Japan #3 Softbank Mobile network.
This time they have not opened on which carriers the Disney smartphone works yet. But the silhouette seems to be the same as Sharp’s Galapagos 003SH [J] for Softbank Mobile. Both also are 3D-enabled, One-seg TV, Felica e-wallet.
Users may use an e-mail address under disney.ne.jp domain, which is the same as current Disney Mobile feature phones. And of course, you can use Disney characters emoji and decome(decoration mail).
You may get one of 6 original “cool & cute” design cases on a first-come-first-served basis.