Although Xbox360 is not so popular here in Japan, some Japanese seem to love and hack Kinect. After the first interesting one to connect Kinect with virtual 3D figure dance authoring free tool Miku Miku Dance, which was originally developed by fans of Vocaloid, human voice singing synthesizer software represented by pretty popular virtual diva Hatsune Miku, to promote Vocaloid singers over the web.
On this movie, Hatsune Miku moves after the guy, Higuchuu, who input his move via Kinect device.

Then, another guy, Nao_u, went further by adding a head-mount-display to his system [J].
Firstly he (whose move shown at the top-left) set up real-time motion capture with Kinect. 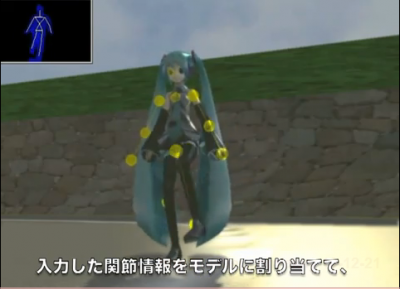 Then, VR920, a head-mount-display(HMD) by Vuzix is bound its location on his face. 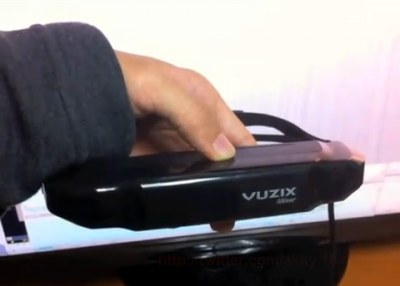 By geomagnetic sensor, you can get which direction the HMD faces, so it is doable to render appropriate direction in the virtual world by following the user’s head. 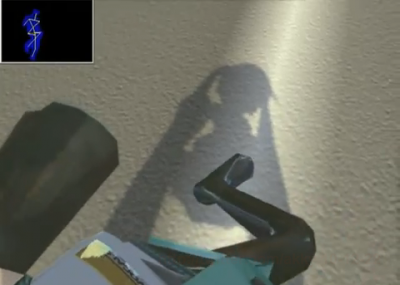 Nao_u is seeing his left leg, but for his viewpoint, it is Hatsune Miku is looking down her left leg in the virtual world. 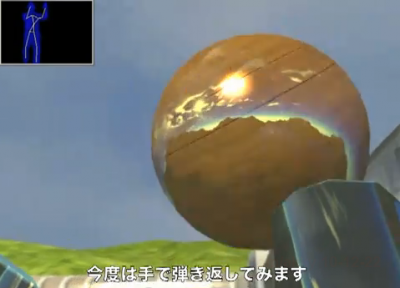 Punching a virtual ball. His virtual world is using Bullet Physics Engine and collision is supported so you may hit the ball.

He wrote that he has only 1 square meter free space in front of his PC desk so he could move not so actively. He said that it will be more enjoyable with bigger space. He finished his post, “Great age comes that you can make things like this only by marketed products at your home.”