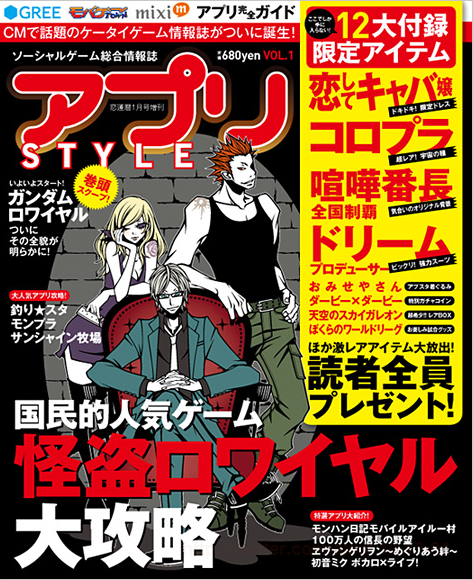 On December 2nd, Japan’s first (maybe the world first? do you know?) cellphone social game application magazine “Appli Style” has been released in Japan.
The magazine, costs 680 yen (US$8), published by a publisher Eastpress, are sold at bookstores and convenience stores around the nation. (-> “>purchase from Amazon Japan)
On top of the cover of the initial issue, there are Gree, Mobage Town and Mixi logos.
There are popular mobile social game titles taken up.

I guess that most of regular users of those mobile simple games do not search or share the game info on PC web, and it is unlikely that people use multiple tab browser on mobile (latest feature phones are multi-task supported though). All mobile social gaming platform provide users communities to share the information to play those game better, I do not think that majority of the users discuss on how to solve the game there.
Those players (who should also be players paying couple of ten thousands yen every month on them) may need this kind of handy guidebook besides their ketai.