Before smartphone, there were feature phone applications. Java MIDP is one of the application environment used on Softbank/Wilcom/KDDI au in Japan, and also on Motorola feature phone, etc. Android is known to use Java-derived environment. Google made different virtual machine Dalvik with avoiding using Sun’s(and now Oracle’s) Java, but Java/CLDC profile MIDP is authentic standard which you could develop cellphon applications.
Because of its long history, there are tons of MIDP applications exist on those cellphone. MIDP is very limited in comparison with Java for regular PCs, but it was well chosen for the limited cellphone environment.
Helped both by hardware and software improvement, a Japanese programmer Yukoba, who says himself as “Virtual machines on JavaScript and ActionScript otaku”, released this “Java MIDP implementation on HTML5 and Flash” at Firefox Developers Conference 2010 in November, where jQuery developer John Resig attended.
His compiler generates JavaScript from MIDP Java class files, so the applications written for feature phone can be run on HTML5 browsers – Firefox. He also developed a compiler to ActionScript, to run it on Internet Explorer 8.
He also launched a showcase-site where you may play about 20 games and utilities made on Java MIDP. 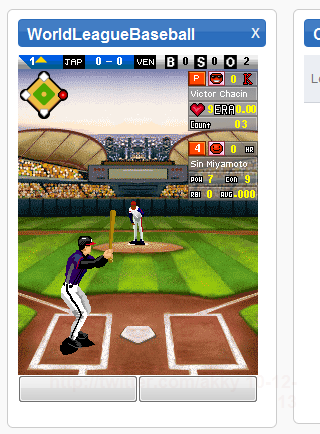 He seems to be working on improvement of the emulator now. As I said above, there are a lot of MIDP application resources in Japan so it is good to run them on the modern web browsers.