QR Code seems getting popularity in West because of smartphone. There are a lot of interesting ad campaigns utilizing QR Code recently in English.
There was also a news that Google’s URL shortening service goo.gl supported QR code generation, then Bit.ly followed the trend this week.
Some of you might know that QR Code marketing were often quoted with “only in Japan” for years. And this is one of the unique thing you may reproduce in your language when your people want to know more and more about QR Code.
It is the QR Code Blog. It is not a blog about QR Code, but a blog all written in QR Code. 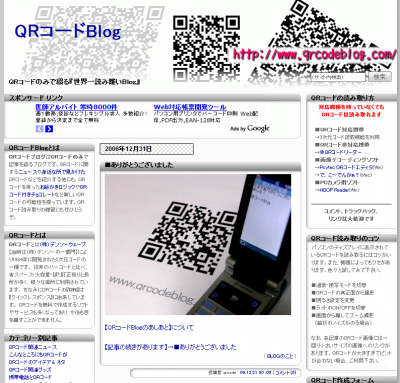 You know that QR Code can convey URL and/or mail address, but in reality, a QR Code can include about 4,300 roman alphabets, or about 1,800 Japanese characters (size of the code will be big, and error correcting capacity makes the maximum number smaller). So this person embed his article on the code(s) and published as “the world most unreadable blog” he said.
The blog started in September 16th, 2004 with this,

If you scan it (by Android/iPhone app for example), that will give you Japanese text, which tells,

I am trying to build a blog using QR Code. Please enjoy this inconvenient blog both for a writer and readers. It will be good if I can post every day.

Two and a half years later, the blog ceased at the end of 2006. Probably because QR code became too common and the blog could not expect further attention. On the last post, the author wrote long article with 5 QR Codes,

I double translate them from Code to Japanese to English,

Long time no see. How have you been doing? Time flied in 2006. Sorry I did not post since September. I apologize.
I began this blog in September 2004. It was the time when I was finally seeing real usage examples of QR Code. Now two years passed since I set up this blog with the motivation to pass on the wonderfulness of QR Code to many people, the situation around QR Code has changed significantly.
Now QR Code is recognized widely, used on food, magazine, outdoor advertising, name card, etc. Now QR Code reader function on cellphone becomes commonplace. Are you seeing much more QR Code recently?
In last two years, this blog has been taken up on a lot of websites, magazines and TV programs. I can not know how much I could contribute on spreading QR Code to be recognized precisely, but if I made some help, that will be my great pleasure.
http://(Akky: seems his encoding mistake)As seeing QR Code widely prevalent, I think this blog has completed its role. I today declare the end of this blog. I really appreciate you all readers who scanned and decode this blog with your cellphone or so. Thank you so much.
2006-12-31