Facebook has over 500 million members worldwide, but only 1.4 million of these live in Japan. The company established a subsidiary in Tokyo earlier this year, localized its site in 2008, and released a special version optimized for Japanese cell phones a few weeks back. And now it seems to be time to partner up with local players to expand its reach.
The first partner (of possibly more to come) is major media conglomerate Recruit, which, how the name suggests, is particularly strong in the human resources field. Next to releasing printed magazines for job hunters, Recruit is active in this area online as well, with Rikunabi being the biggest property.
Now Recruit and Facebook have inked a deal to launch “Connection Search”, a site that helps college alumni find jobs by connecting with graduates from their schools. The service, which went live today, is accessible to Facebook members only and automatically pulls information from your profile (mainly information about your current or ex-high schools and colleges).
Here’s my page on Connection Search (click to enlarge): 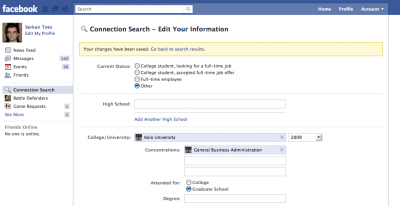 Once you fill out your profile, the service generates a list of Facebook members who come from the same schools and colleges and work in the same fields, basically generating an old boy/old girl network on the back of Facebook.
The idea is to make it easier to find jobs for Facebook members, by making it easier to discover and connect with fellow grads and linking to a dedicated job hunting web site called Rikunabi 2012 that’s operated by Recruit.