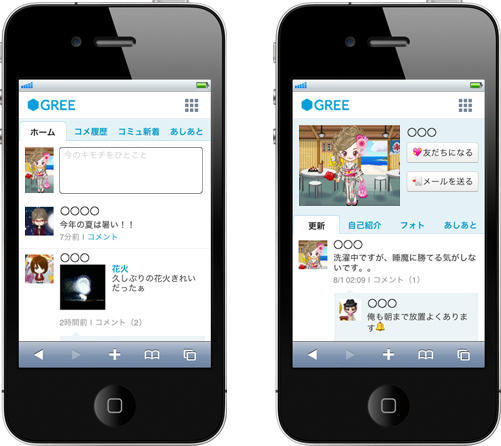 On Gree iPhone version website, which started as Beta in August, now you can become a member of Gree network.
Unfortunately, it does not mean that iPhone users in other countries can communicate with Japanese Gree users, because the iPhone site registration also requires a softbank e-mail address attached with the Softbank iPhone.
Also, the iPhone version website is close to Gree PC version, which only has 1% of total Gree traffic and does not provide any popular Flash Lite games promoted on TV commercial films. Just social graph, communities and avatars are there.
But anyway, registration from iPhone is the one thing has been wanted by half of iPhone users who do not keep their feature phone in Japan.
No.2 Mixi have not realized it yet. Mixi’s iPhone app is a kind of Mixi “Viewer” and has not been improved much after the release.
Mobage-Town owner DeNA is running iPhone/iPad based English social network MiniNation in U.S., but it is not available on Japanese iTunes Store. PC version of Mobage-Town was shut down recently, and Yahoo! Mobage takes it over. Yahoo! Mobage offers to all PC users an alternative registration method not by feature phone terminal ID but by credit card, and iPhone users can register as a PC user, but the contents on Yahoo! Mobage is Flash-based games so it is meaningless for iPhone/iPad.