The commercial depicts that a guy plays the first Super Mario Brothers in 1985 (see TV set and a radio-cassette recorder). It was a common scene nationwide.
But on their special website [J], Nintendo put another short movie and warns users “Don’t do that”. The text says,

At the time Family Computer(=NES) were sold, people blowing metal terminal surface of its cartridge to clean dust were done all over the country. However, it turned out that this will make it rust to cause malfunctions.
This is the same for all other hardware/software having such metal terminals including Nintendo DS, so never blow on them.
When you care dust and dirt, you may purchase use a cleaning set. 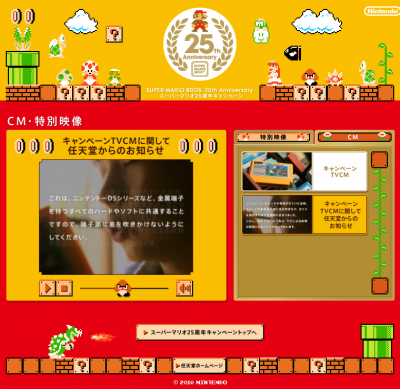 If it is no good, they could have avoided to use such scene on the commercial, then such warning video is not needed, but, maybe it was an integral part for them to draw the good old Famicon days.
via N-Wii.net