In Eastern Japan, around 5 p.m. on 29th (Japan Standard Time), massive number of people in office and home got different than usual sound on their cellphones. It was one of the latest function on Japanese feature phone, Earthquake Early Warning (EEW) system.
The earthquake itself, which happened in Fukushima prefecture, northern Japan, recorded 5.8-magnitude, no serious damages have been reported so far. My cellphone got the alert but I myself could not feel it in Tokyo.
The alert over cellphone network set in motion, probably the first time this year in Tokyo area.
As a result of million users alerted, Japanese Twitter users’ timeline were filled with the words “Earthquake”, “Cellphone”, “Strange sound”. Searching by “Earthquake”(of course in Japanese) updated tens of thousands tweets in seconds. 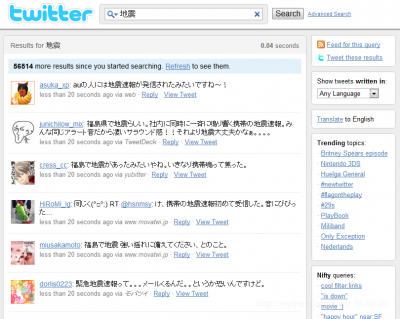 Buzztter’s ranking, a Japanese alternative Twitter trending topic (Twitter does not support Japanese yet) are mostly filled with earthquake related words (all non-striked texts below).

EEW system, which were already provided for TV/radio/Home PC and dedicated devices, was gradually installed on new cellphones since 2007, when No.1 carrier NTT Docomo and No.2 KDDI au jointly announced their support [J]. The alerting message is named “Eria Me-ru”(Area Mail). 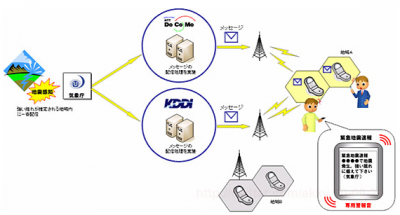 As this warning should be sent quickly, to cover more people who have not hit yet, and the number of alerted people could be tens of millions, their messaging system was separately developed from their regular cellphone messaging, the release says. 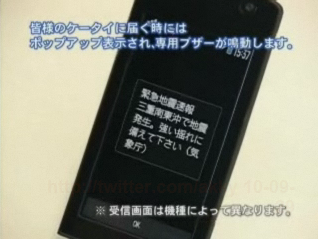 This EEW alert rings even when you turn the phone in manner mode, there were tweets that they got annoyed in theater and high-school class (where the students are not supposed to bring cellphone by rule), but it is better than hit by critical earthquake without warned.
The “strange” sound can be listened the Docomo’s website [J]. There are one for earthquake and one for general disasters.
No.3 cellphone carrier Softbank announced their support [J] last year, but only the type 831N supports this alert system at this point.
Generally speaking, Docomo’s and KDDI’s feature phone by Japanese vendors support this, but smartphones with foreign based OS-s does not because many of them are international model. Few domestic-only model of smartphone support.
If you are in Japan and have Docomo/KDDI au cellphone, you may check if yours is supported on Docomo’s [J] and KDDI’s [J] page. On many of KDDI’s model and some of Docomo’s model, the alert seem to be turned off by default. You can set it on from menu. That may make you survive when the serious one will hit on your area.