Gree, a Japanese social network service competing the No.1 position with Mixi and Mobage-Town around 20-million-users-line, released its iPhone site as a beta version today. 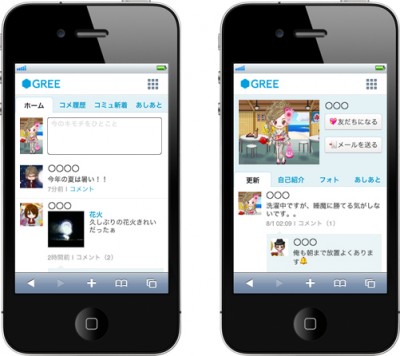 Their release tells that they developed iPhone version of Gree as “the new third version”, different from both PC and mobile(Japanese feature phones) version, especially for touch panel interface.
The point of iPhone version is to cover increased smartphone user base, and to expand their service to oversea.
As well as Mixi’s iPhone app, you are unable to register Gree on this iPhone version. Half of Japanese iPhone users keep their feature phones, and iPhone share is not so big here, lack of registration feature may not be critical for now, but expanding to oversea on smartphones definitely require it. Gree says that the future official launch of iPhone and Android version will let you register the service from those smart phones.
iPhone and Android “Applications” are also being planned.
Currently, this beta version provides the following features,