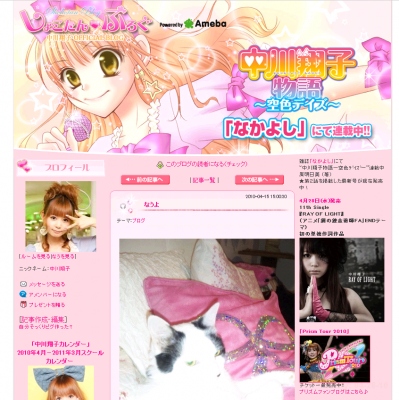 Shoko Nakagawa (aka Shokotan), one of the most successful Japanese celebrity bloggers, finally started Twitter (@shokonakagawa) on February 24th with a tweet “I begin to chirp…” [J]. 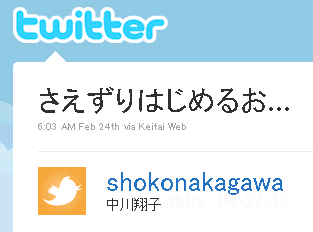 This could have been a milestone for Japanese Twitter to show the centre of the celebrity blogging moving from regular blog to microblog. However, after posting 15 tweets sparsely in 2 months, she posted that she “gave up doing both blog and Twitter” [J].

Her blogging style, which make her very unique among celebrities her early days to become popular, is to post a lot of one line entries and/or photos taken by her cellphone, sometimes makes 50 posts per day. You may see those numbers on the left sidebar’s monthly archives. Her style made a lot of followers of Japanese celebrity bloggers.
In the end, what she did on blog platforms (she has been switched her blog hosting twice) is “microblogging on blog”, and if so, she could not find any advantage on Twitter, which does not have built-in photo upload/show features and the Japanese cellphone version of which has room to be improved.
CyberAgent‘s Ameba blog, which holds over thousand celebrity bloggers including Shokotan, has been running its own Twitter clone Ameba Now, to hope to keep their bloggers within the Ameba sites. And this incident may be a hint that they can lean on and extend their clone, as Twitter will not be able to enhance its functionalities only for Japanese celebrity market.