The world’s No.1 PC vendor Hewlett-Packard(HP)’s Japan branch is running a new campaign “Maid in Tokyo” [J], featuring two girls from Japanese idol unit Aidoringu(made up from “Idle”+”-ing”) in maid costume, to appeal that the HP’s PC are “made in Tokyo”. 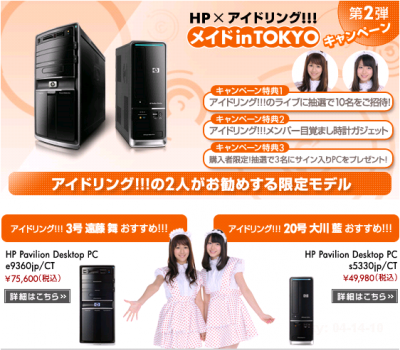 According to the HP site [J], since 1999 they have been producing PC in a factory in Akishima city, Tokyo, to lower the incipient failure, a fair amount of which is caused by vibration and shock during transfer. So shorter moving distance, more reliable their PC is, is their message.
On the campaign, you may apply for the prizes 1. Aidoringu live concert tickets, 2. alarm clock beeps with the idol’s voice message and 3. note PC with idol’s signature.


One of the girl recommends you a quad-core AMD Phenom processor with 2TB HDD. 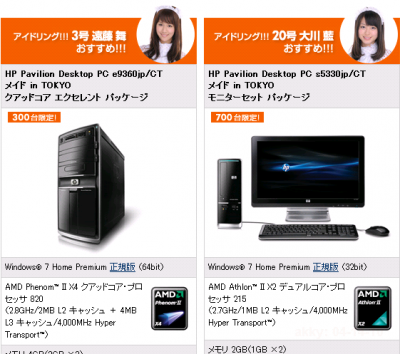 I do not know much how Hewlet-Packard promotes their PC in USA, but this maid thingy seems genuinely “do as the Romans do” style for Japanese geeks.
The following two tabs change content below.