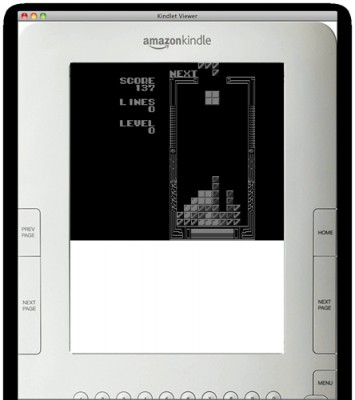 Japanese mobile system/application developer KLab Inc. [J] announced that they had developed a clone of Kindle Developer’s Kit (KDK) and Kindle Emulator.
The official KDK has been available for limited beta developers since February. Klab release said that they could not wait approval so that they built the emulator from Amazon’s specification documents.
Currently, not all Java interfaces are supported, but two main classes which are needed to realize key input and screen rendering are implemented.
As testbeds, two popular games – Tetris and Load Runner – are made on it. Tetris’s source code is also provided.
Here is a movie how NES emulator is running on the KDK clone.