Twitter has turned on official retweet button for Japanese users. You could use it by changing your menu language with English, but most Japanese users see this button first this week. 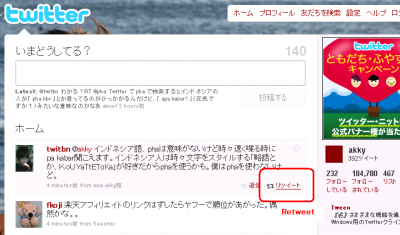 The label of the retweet button in Japanese is “リツイート” which just show its English sound in Japanese katakana (phonogramic alphabet). Japanese localization staff avoid to make translated word for the concept.
On Twitter Japan Official Blog, they translate Twitter co-founder Evan Williams’ long message [J] to explain why this official retweet is introduced.
As Japanese Twitter users are already confused by unofficial “RT” and locally suggested “QT” (see Satomi Ichimura’s explanation), and some tools already support this “QT”, it is inevitable to cause controversy among users. “RT” is being on the top of Twitter buzzword in Japanese.
In nature, Japanese can convey more than doubled information with the same 140 letters than English, so many of Japanese tweets have more room to add comments with “unofficial” RT. Many Japanese Twitter users get used to tweet non-demanding reply by using RT (or QT by some people).