Nihon Keizai Shimbun (The Nikkei) [Wikipedia], one of the most influential industrial newspaper in Japan, who had declared its digital version launch plan for this spring on its January 3rd newspaper, seems to set its starting time and fee plan, according to multiple sources.
Both February issue of Facta magazine [J, magazine subscription required] and MyCom Journal column [J] reported that the internally announced the Nikkei’s digital version plan.
According to them, the “Digital Version” of the Nikkei will launch in March. Current paper subscribers, who are paying 4,300 yen (47.7 USD) per month for morning and evening papers, can also read the online version on the web by paying extra 1,000 yen (11.1 USD). If you only need the online access, monthly subscription fee will be 4,000 yen (44.4 USD) per month. The subscription fee will be basically charged by credit card.
The number of paper subscribers is about 3 million. (by Nikkei [J])
MyCom wrote that Nikkei can differentiate the new online paid site from the current Nikkei Net, which is totally free, by providing dedicated cellular phone site, access to company database and past articles search (most of Japanese newspaper’s online site remove their past news from the web after few weeks). 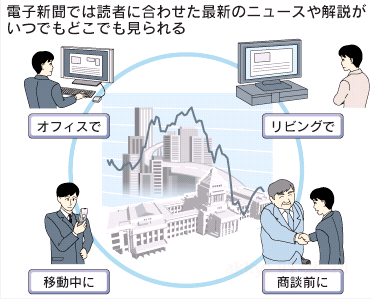 Nikkei’s image of digital version used on their last year’s article
Nikkei also wrote that the online version will have by-user based article recommendation, personalized targeting ads as well.