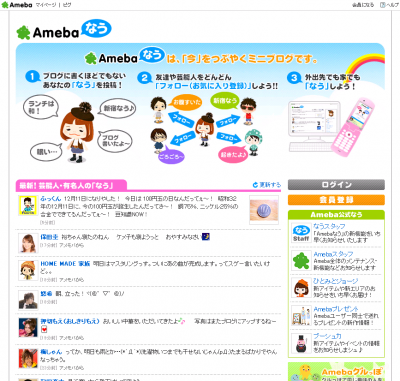 Different from cellphone version which limit users only from Japanese cellphones by checking browser’s user-agent and others, PC version is of course accessible from any browsers.
Cyber Agent CEO Susumu Fujita takes an account name “shibuya”, which comes from a town name where Cyber Agent office is. 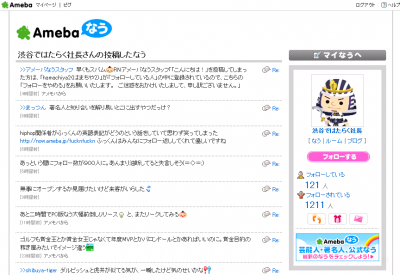 On the same day of the PC version release, a popular web security hacker Hamachiya2 made fun of the system by spreading message to let automatically follow him (the account seems banned now).
Takafumi Horie, a former Livedoor CEO, know as a sworn friend of Susumu Fujita, analysed [J] the intention of this service. He wrote the service is a obious Twitter clone and many of Cyber Agent celebrity blogs are short-message style anyway so Ameba Now itself is not attractive for celebrities who are using Ameblo blog heavily. He says that the point is Cyber Agent may be fear for their thousand celebrities interested in Twitter so this Ameba Now is a pre-emptive measure.