Japan’s largest social networking website Mixi[J] launched a social app service for cellphone users called “Mixi Appli Mobile” on Tuesday.
The app service’s PC edition called “Mixi Appli” was introduced last August, which allows any Mixi users to choose their favorites from a showcase of the apps and to enjoy playing with their social friends online.

Mixi App Mobile presented as much as 104 titles as of its service release, including Bokujo Monogatari (A Story of Ranch) developed by Liveware[J] and Machitsuku (Developing a town) by Unoh.
Mixi App developers need to get their works examined by Mixi prior to presenting them to the users.   Once the examination is passed, the state given for the app will turn from “under development” to “in service”.
According to Mr. Akinori Harada, the head of Mixi service operations and the company’s managing director, mobile access to Mixi’s web-based services share almost 70% of all usages.   Social apps are more compatible with cellphone handsets in terms of the user’s convenience, Harada says.
In order to motivate potential developers to introduce their apps, the company supports them to monetize apps by distributing in-app ads.    The app developer can earn JPY0.01 (USD0.0001) per one impression when presenting in-app ads to the users.   In-app transaction API is to be introduced in early November, and it will allow users to pay money in the app by using Mixi’s user point system.   Corresponding to the amount of the point paid to the app, its developer will be able to get cash after deducting Mixi’s 20% handling charge.
via CNET Japan[J]
See Also:

——————–
Oct. 29th Update:
Due to the system’s heavy load that the rush of many new users has caused, users have been in technical difficulties to log in to Mixi App Mobile service during the last two days.   Machitsuku, one of the game apps mentioned above, is now ranked the 1st in the number of the app users, and has earned more than 600,000 users in just two days since its release. 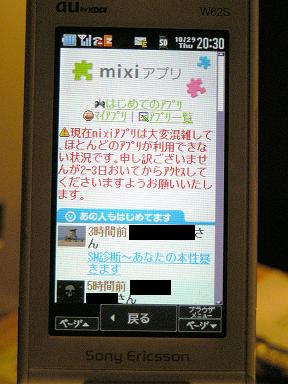