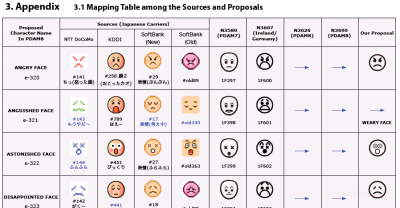 You might have heard about that Gmail and iPhone has added Japan originated emoticon, Emoji, set. You may know that Google has been promoting those “letters” into Unicode standard.
Filing those drawings as new letters is, though Chinese letters were made from drawings thousands years ago, not acceptable for all people, some says it is useless in other areas, culturally biased, too childish, violation against Unicode compatibility policy, etc.
But it is true that those Emoji-s are widely used on Japanese cellphones already, and Japanese population and market are not ignorable for those world-class internet companies including Google, Apple and others, it is understandable Google and companies need a standard way of handling those Emoji-s.
3 major Japanese cellphone carriers leaves incompatibility of those Emoji-s deliberately for their customer retention, which Google and others also try to solve by this standardization. This is so good for Japanese web developers because converting Emoji-s among carriers is one of the most hated tasks they have to do here.
Google successfully got agreement at Unicode Consortium after a great struggle, and now they are proceeding to the next level, ISO Working Group (WG2).
On the WG2, Ireland and Germany national bodies suggested an alternative, to make it more universal. They proposed more “universal” emoticons set. (citations to the original set)

On it, they also modified Emoji-s’ glyphs to what they thought more common. However, Japanese researchers think that some of emoticons’ expressions came from Japanese manga expressions, from which most Japanese can easily understand what emotions they conveys, but hard to guess if you are not familiar manga.

If you are interested in what argument around Emoji, Manga and Japanese culture are happening in Tokyo this week, please take a look at Katsuhiro Ogata’s proposal [English and Japanese, side by side].