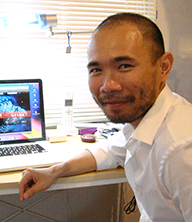 Batara Eto, who suggested to make a Japanese social network to his boss in late 2003 and programmed Japan’s biggest social network Mixi, let the company (E-mercury) to change their primary business and rename (to “Mixi”, of course) with the huge success, then left his CTO job in 2007 [J], is reported to invest to Xsago, Singapore-based mobile application company. He also assumes a post as Technical Advisor .

Known by his success story with Mixi and his advocacy for open source, he was rumoured to run his own small tech start-up to develop something, which was recently disclosed as a new online photo sharing site Ficia, which is under private beta. I tried Ficia and it seems to aim better photo sharing experience, such like what Gmail did against Hotmail to Flickr, by using plenty of latest web technology. Let’s hope Ficia is not fishy 🙂

Xsago’s mobile application Foyage is explained as a location based utility tool to give you shop information around you, currently covers Singapore and Indonesia, where Eto originally came from.
(Hat tip to beeant)