You might have already seen photos of a “real” sized Gundam statue standing in Odaiba, Tokyo bay front. If not, you can see thousands of pictures on Flickr.
The organization behind it, Green Tokyo Gundam Project Committee, who claims that building Gundam is for ecology enlightenment and inviting the Olympics to Tokyo in 2016, holds a charity auction on Japan’s biggest auction website, Yahoo! Auction. The single winning bidder will be able to stand on top of Gundam’s shoulder and have a memorial photo taken by a professional photographer. 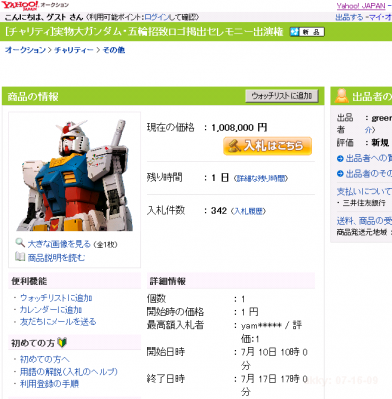 On the day before the closing time (July 17th 17:00, Japan Standard Time), there have been 342 bids so far and the current price is 1,008,000 yen (about 10,000 US dollars).
As the seller strictly prohibits secondary use of photos on the auction page, and Japan’s copyright law does not support fair-use, I avoid to quote those pictures. Please go and take a look here.
For budget travellers, there is another full-sized Gundam, only bust though, at Nasu Highland Park, Tochigi prefecture [J]. There you may climb up to its shoulder and take pictures freely. There are 4 of 1/1 sized Gundams in Japan this summer.
[Update] The final bid was 2,601,000 yen (about 26,000 USD).
via Slashdot Japan [J]
(English corrections by Sean O’Hagan)