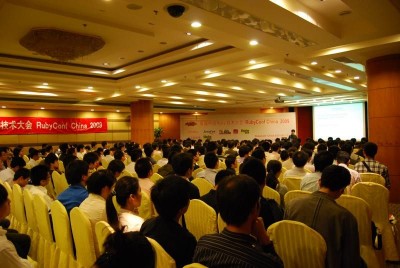 May 21st, the father of Ruby, Yukihiro Matsumoto aka Matz, visited Shanghai to attend RubyConf China 2009, the first large Ruby conference in China.
The conference was an astonishing success. 450 people attended the event. All talks except keynote were given in Chinese.
Matz gave a keynote which reveals design concept and characteristics of the language. Matz emphasized human-friendly attributes of Ruby, as always he does in other conferences.
Richard Huang from Ekohe has described how the design patterns such as Singleton, Observer, Command, Iterator, are implemented in Ruby. And he explained that how are they different from Java implementation.
Robbin Fan of JavaEye [CN] told that his JavaEye website, which is the second biggest developer site in China, is written with Ruby on Rails. He explained many optimizing methods which he learned from the experience of running a popular site. It is a surprise for Chinese attendees that “JavaEye” is running by Ruby on Rails.
In afternoon sessions, Robin Lu pointed out some common mistakes in Ruby/Rails development. A guy from ThoughtWorks gave a talk called ‘Ruby/Rails in enterprise development’. A guy from PinPoint told that Chinese government is already using Ruby on Rails in their purchasing system.
Joseph Wang from SAP gave a detailed talk about BlueRuby project. BlueRuby is another Ruby implementation which runs on SAP platform. With BlueRuby, Fortune 500 companies will be able to introduce the power of Ruby to their enterprise systems.
Koz Masumitsu, a Japanese entrepreneur based near Shanghai, introduced a Ruby industry development plan of Shimane prefecture where Matz lives. Shimane is one of the most remote area in Japan, and their local government is serious about Ruby.

Matz was treated like a rock star. Many attendees want to take a photo with him, or want his autograph.