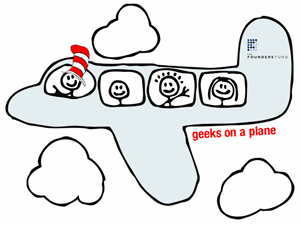 While it’s not unheard of that entrepreneurs and VCs from Japan go to California for information exchange, fund-raising (sometimes), networking and other purposes, Americans taking the trip to Tokyo are still the exception. This is the main idea of an initiative called GeeksOnAPlane, initiated by Silicon Valley icon Dave McClure (his San Francisco-based venture capital firm Founders Fund) and China-based Web2Asia: Get people from the US over here to Japan to learn about the local tech and web industry scene.
Starting on June 7th and lasting through June 16th, a total of about 25 US-based entrepreneurs, VCs, IT journalists and tech bloggers will hit up Tokyo, Beijing and Shanghai. The Tokyo leg of the tour starts tomorrow (Monday, June 8th), with everybody attending the 25th Tokyo 2.0 event in SuperDeluxe in Dowtown Tokyo.
You shouldn’t miss Tokyo 2.0, especially because the events following on Tuesday and Wednesday (the day the tour moves on to Beijing) are invitation-only.
Disclosure:
Asiajin is official media partner of GeeksonAPlane. I am a writer for tech blog TechCrunch, which is also a media partner. Co-organizer Andrew Shuttleworth is an advisor to Asiajin.