An unique web startup founded and run by a successful Japanese entrepreneur in Portland, Oregon, declared its end of services this month.

Notice
LUNARR will be discontinuing our Elements and Themes services as of Sunday, May 10th, 2009. You may continue to use both services until that date, at which time your LUNARR Terms of Service will be terminated and content will no longer be accessible.
We would like to sincerely thank you for being a part of the Themes and Elements beta experiments!
Best,
The LUNARR team
LUNARR blog

Lunarr Themes, named “Themes” after their second service Elements launched, started in 2007. The concept of the service is to introduce “back side” to every single page on the internet, on each of the back you may leave memo, start discussions with e-mail. It is a collaboration tool as same as Toru’s first product Cybozu groupware with unique flip idea.

Lunarr Elements, which is the other service by Lunarr, is a communication service around user posted images, just launched early January 2009, this year. 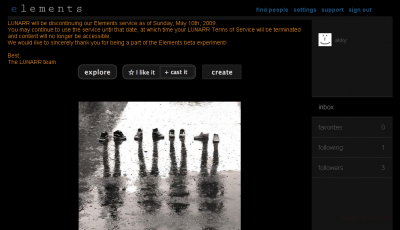 Toru Takasuka, who is a legendary software entrepreneur who made an independent enterprise package software company Cybozu by leaving Panasonic/Matsushita around his 30, left his CEO job and sold all his stock in 2005, expatriated himself to Portland with bringing his capital gain.
He told me before that his intention to move to rather small city instead of the Silicon Valley, is to get a good attention without hard competition both for promotion and hiring, which exactly traced his first success in Japan started from Ehime, small town in Shikoku island, then moved to Osaka, then Tokyo.
On his blog [J], he occasionally explained that he would have not made his first child Cybozu be a global company. Even though Cybozu is beating IBM/Lotus and Microsoft in market share in Japan, it is “only in Japan” phenomenon. Instead of using IPO-ed Cybozu, he rather wanted to begin again from scratch with his full of control.
On his announcement on his Japanese blog, Takasuka writes “I am not giving up my way to the global-level startup, global-level service”.
Different from many Japanese software companies who hold a small branch with 1-2 persons in valley by doing nothing substantial but so-called “local research”, mainly to show their pose of globalization to their Japanese customers, he is the few serious person who has his own strategy and policy.
In USA, he seems to meet a lot of influential people in industry and makes a good network. He also held an English bloggers tour in Tokyo, of course as a part of Lunarr’s promotion, but also to help other Japanese local startups linked to influential people in English blogosphere.
It is sad to hear their close but I wish I hear a news on his next service soon.
[disclaimer] Akky Akimoto worked as an engineering director of Cybozu USA under Toru Takasuka, when he was a CEO of Cybozu HQ, San Francisco.