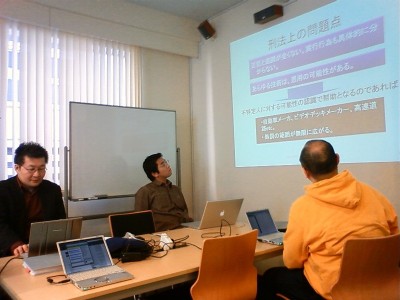 Winny is the most popular P2P file-sharing software in Japan.
Isamu Kaneko [JP], the developer of Winny, was prosecuted by Kyoto Prosecutors Office. Kaneko was found guilty and fined 1.5 million yen ($15,000). Kaneko and the prosecuter both appealed to Osaka High Court.
4th January, 2009, Toshimitsu Dan [JP], a lawyer of the defendant, and supporters of the defendant had a meeting to share latest information about the trial. [1]

5th June, 2002, the beta version of Winny was released in a 2channel forum. Winny gained much popularity in Japan as a file sharing software.
27th November, 2003, two Winny users were arrested by a high-tech crime squad of Kyoto Prefectural Police. They were prosecuted for an illegal uploading of copyrighted contents. They were found guilty and got a suspended jail sentence.
9th May 2004, Isamu Kaneko was arrested, and was prosecuted for abetment of copyright violation on 31th May. Kaneko was released on bail on June 1.
Right after the arrest, supporters of Isamu Kaneko formed a website ‘freekaneko.com‘ and a defense fund for him. The fund has been received 16 million yen ($160,000) donations from many anonymous people.
13th December, 2006, Kyoto district court convicted Kaneko and fined 1.5 million yen ($15,000). 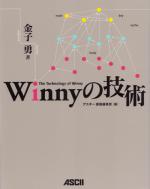 October 2005, Kaneko published a book called ‘The Technology of Winny’. It describes a P2P file sharing technology which is used in Winny. [2]
[Disclosure] I am taking a leading role in supporting Isamu Kaneko. I am a creator of FreeKaneko.com and a chair of the League for Software Engineers.
1. 無印吉澤 – Winny裁判報告会に行ってきました [JP]
2. Winnyの技術, Isamu Kaneko, ASCII Publishing, 6th October, 2005 – amazon.co.jp [JP] ascii.co.jp [JP]