Bounen Kaigi, annual year-end conference considering the record of the year, was held at Yahoo! Japan office again this year. This conference was sponsored by Yahoo! Japan and the event hosts were Gen Taguchi (blog: 100shiki[J]) and Daiya Hashimoto (blog: Jyoho Kogaku Passion for The Future[J]). 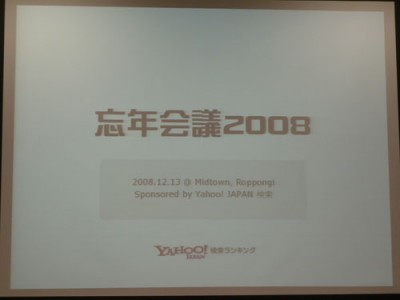 This conference consisted of the followings.

This ranking is 10 noticeable net services which Taguchi/Hashimoto picked up from the list collected by their readers. 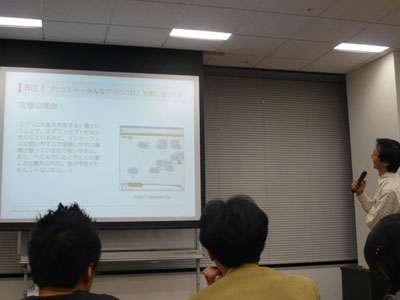 These are not so popular in Japan now, but have a good chance to become big services. Top two services are  not from Japan, therefore this results will motivate Japanese start-ups to make more effort in 2009.

Guest was Keiya Mizuno. He is a writer of million-seller book “Yume wo kanaeru zou” ( means an elephant living out dreams). This book is so popular that it was made to TV drama and came to be the most  sold Japanese books in 2008, more than 1.7 million copies, Hashimoto said.

They explained about the trends on the internet in 2008, for example, comparision between mobile and pc user of mixi or analyzing the age brackets of  newly emerging community sites, pixiv, pu-pe girl and so on.

This may be most important session, the last was Zentai Kaigi. All participants were grouped up by 6 people and discussed.
Theme was “Thinking up the new big net service in 2009”. They must fill up the following paper.

The winner team’s idea is that NEET check the other house through some monitors in their houses. NEET are people who have no job including part-time and will increase in number because of the recession. 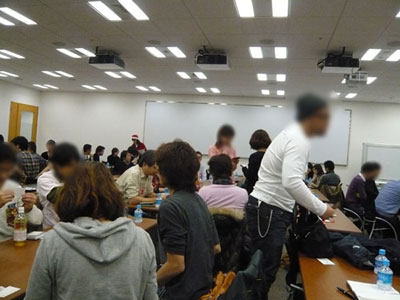 This conference will be also held in 2009. If you spend your year-end vacation in Japan, why don’t you join?