Wall Street Journal reported about how iPhone is not going well in Japan market.

Like elsewhere, Japanese consumers lined up at stores in advance of the phone’s release on July 11, and many locations sold out almost immediately.

Well, in Japan, the hype was somehow “produced”. As far as I heard, Softbank gathered 1,500 iPhone shipment to its flagship store at Omotesando, Tokyo and that information was known to loyal Apple fans beforehand, eventually they lined up there. The long line was made up only there, CEO Masayoshi Son went there and media chased him to there. iPhone Guy was there, too.
At most of stores, small amount of iPhone were assigned, like 10 or 20. It is not strange they were “sold out”. An A-list blogger Masato Kogure (Netafull) went to his local store on the morning, there were only 5 customers on the line for 10 provided iPhone for the shop. Unoh CEO Shintaro Yamada wrote that there were only 6 iPhones sold at Softbank shop Shibuya-mall (only 10 minutes walk from Omotesando) and he could buy it by waiting 4 hours from that morning. Even though big media reported it similarly, the real sale and the number of involved customers were not same as other release-day frenzy like Wii and PS3. 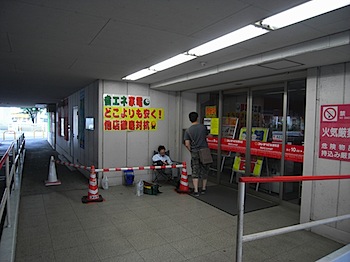 Sales have been slowed by the iPhone’s relatively high price and the fact that Japan is already home to some of the world’s most advanced cellphones. The iPhone’s limited success so far shows how tough it continues to be for foreign manufacturers to crack the Japanese cellphone market.

When iPhone 3G was released in Japan, I sorted out feature comparisons of iPhone 3G and Japanese cellphones. 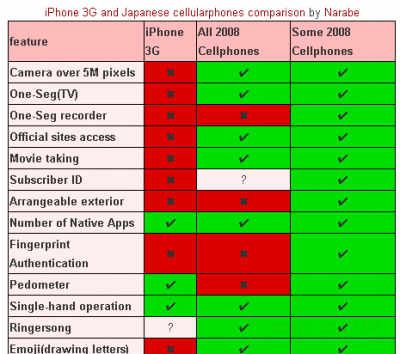 I agree that feature set does not always mean the product’s total superiority. But for me, only better things on iPhone seemed its well-reputed design and new different user interface, with knowing many functions crazily packed in latest Japanese cellphones.

One iPhone feature that is unique even to Japanese users is the App Store, Apple’s online clearinghouse for software, such as games and reference guides. The App Store is popular among U.S. users, but hasn’t taken hold as much in Japan, where consumers tend to be more cautious about making purchases online.

This is totally WSJ’s misunderstanding. Japanese cellphone users have been purchasing cellphone applications a lot for years.
NTT DoCoMo’s iAppli (started 2001) offers thousands official applications. Also user can create and distribute their own application on Java ME, which specification is open for everyone. No Jailbreak is needed. It is better to become official provider if you sell paid-application because NTT DoCoMo will collect fee on top of cellphone bill, but for free applications you do not need any approval process, just place it on your web server.
No.2 KDDI au also has Java ME and Brew (which is hard for non-official development) application platform ez Appli, Softbank Mobile offers S! Appli (EXCEPT for iPhone 3G).
I inquired NTT DoCoMo the number of official iAppli applications, but their answer is that is not disclosed. According to Appli-Get, one of popular directory portal sites for cellular phone applications,

number of applications for major 3 carieers are following,

Of course, these numbers do not show the whole applications, as not all cellular phone applications are registered there. Some application providers develop the same title for 2 or all carieers. So total number of mobile application is not known, but should be bigger than these.
And, those appli-s are not only application you get. Flash on cellphone browser is used even more, especially if you do not earn by applications themselves (it is more difficult to charge for Flash usage. Flash is used more with advertisement model.). The biggest social network and game service Mobage Town provides new casual Flash games every week, so do competitors.
Comparatively speaking, iPhone App Store has only 3 thousands applications in total, for all countries/languages. Although having thousands in 2 months is a great achievement of Apple, number of Japanese-supported iPhone Applications is far less than thousand (I guess. I could not find the way of counting iTunes App Store by application language).
Small cellphone vendors cannibalizing in the small (but still profitable) domestic market and unable to go oversea is a huge problem in Japan, which everyone in industory here noticed and worried. But the first iPhone 3G was not the remedy for many Japanese mobile users, though its being unique and different is a good stimulus for both Japanese vendors and users to rethink about ideal mobile gear.