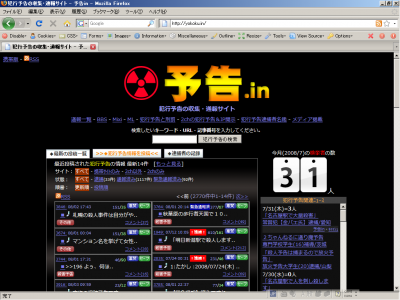 Yokoku.in is a very controversial web site made by Yano Satoru of satoru.net.
What is this?
I must made an explanation about the background before introducing the site. 8th June, a mass murder was occurred in Akihabara. One man killed 7 people and injured 10 people. He had written a message in Internet bulletin board before committing the murder. The message was “I’m going to kill people in Akihabara”.
The murder caused a many policy changes in Japan. One of those changes is a no toleration policy for crime warning. Police has been arrested many people who made a crime warning in Internet, which are possibly false. In Japan, crime warning possibly consist a crime such as “business obstraction”, or “intimidation”.
Ministry of Internal Affaiar and Communications announced that they are going to develop a software to detect crime warnings in Internet within a budget of 200 million yen ($2 million). Then, Satoru Yano responded to that announce. He created a crime warning aggregation site ‘yokoku.in’ in few hours.
Yokoku.in crawls the web and collects all articles contain words like ‘murder’, ‘crime warning’, ‘kill’. If Yano founds it can be a serious threat, he will call the police. Then police will arrest them.
33 people were arrested so far. Some of them were arrested by made a clearly humorous crime warning by joking.