The biggest PHP community conference in Japan, PHP Conference 2008 was held on 21th July2008 (Sea Day, national holiday) at Kamata, Tokyo. There were 500 PHP engineers atendees.
Keynote began with Rui HIROKAWA, Japan PHP users group, who has been contributing a lot for PHP multibyte handling. He talked mainly about the PHP updates on PHP5.3, and future PHP6.
The following sessions in main room were given by big-name companies who heavily use PHP, Gurunabi (Groumet Navigation, the biggest online restaurant guide website), Rakuten (The largest online shopping mall) and Cybozu (No. 1 share groupware package vendor).
Although Rakuten hires Matz, Yukihiro MATSUMOTO, who wrote Ruby, PHP are still used widely in Rakuten, as they said.
Then two popular PHP influencers, halt and Hideyuki SHIMOOKA talked the Japan PHP users group retrospective and how to enhance your information-collecting ability.
The panel discussion, under the masochistic title “What language you must learn after PHP?”, had been getting a lot of attention on the web because of the splendid members, 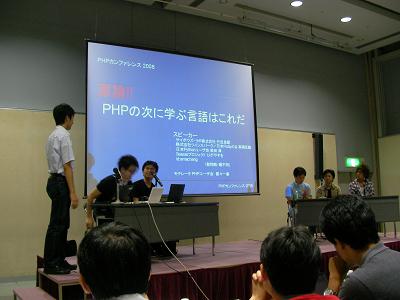