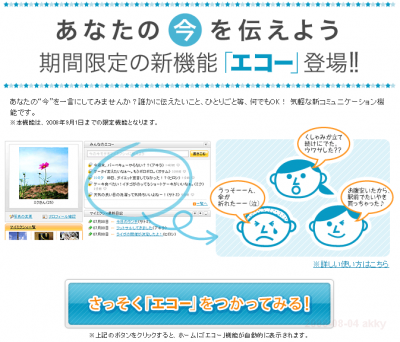 says that this service is for limited time only until September 1st.
If you turn on the Mixi Echo, it will be shown at the best location at the top of your home page, 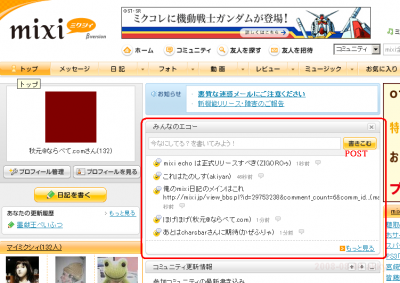 The five latest messages from your Mixi friends (known as “mai-miku”) are shown after the input box. You can also click through to the archive pages to see the past messages, 25 messages per page.
The message length limit is 150 letters, which is 10 letters longer than Twitter in roman alphabets. More than double for Japanese letters as Twitter’s limtation is 140 “bytes” instead of “letters”. Long URL is not “tinyurlized”.
# update: Twitter now supports multi-bytes letters count. My mistake.
Mobile site viewing and emoji (special drawing letters set provided by three major cellularphone-carieers) are supported, the same as for other Mixi services.
Mixi has grown along with its blog service. You can limit access to your blog entries to your friends or to friends and friends of friends, but with Mixi Echo your messages can be viewed by anyone who can find your profile page.
Twitter is the most popular microblogging service in Japanese (and worldwide), followed by wassr (English version), which recently became popular among web teckies due to Twitter and Twitter API problems. Microblogging services have only been popular among net savvy people to date, but Mixi and their 14 million users have the potential to bring microblogging to the masses if the service gets a good response during this one month trial.